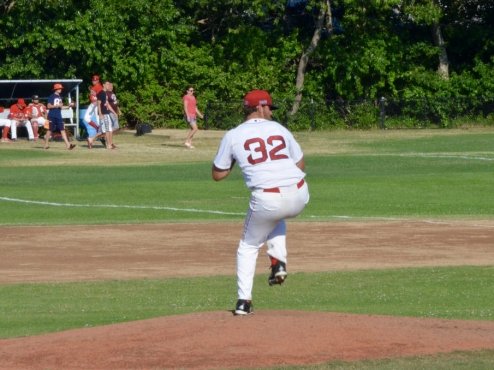 Sammons cruised through 6.1 innings giving up only four hits, with five strikeouts and no earned runs. He recorded his first win of the summer campaign. With the performance, his ERA on the season is now at an impressive 1.65. Montgomerie came in to relieve for Sammons in the bottom of the seventh, and was lights out. He tossed 2.2 innings, struck out three and didn?t give up a hit or an earned run.

Cory Abbot (Loyola Marymount, 0-1) was on the hill for the Firebirds, pitching for five innings, with five strikeouts and three earned runs.

It did make it easier for Sammons and Montgomerie that they got a lot of support on the offensive side of the ball. The Red Sox had a total of 12 hits in the ballgame, tallied by seven different players. Matt Winaker (Stanford), who is red-hot, went 4-for-5 in the contest. Deon Stafford (Saint Joseph?s) and Kevin Smith (Maryland) each had two hits, respectively. While JJ Muno (UC Santa Barbara), Brendan Skidmore (Binghamton), Will Toffey (Vanderbilt) and Mikey Diekroeger (Stanford) all recorded one.

Y-D didn?t waste any time, as they pushed across two runs in the first. Winaker led off the game with a single and advanced to third on a wild pitch and a passed ball. With a Muno RBI single, Winaker would score resulting in a 1-0 lead. Stafford reached first on a single past the outstretched glove of Zach Kirtley (St Mary?s), and made the score 2-0 on a Toffey RBI double.

The Red Sox added to their lead during the next frame. Connor Wanhanen (TCU) got aboard with a two-out walk, and crossed the dish on a wild throw to third after a Winaker single.

Y-D struck again in the top half of the fifth. Muno reached first after being hit by a pitch, and advanced to third on a nicely constructed hit and run. Muno extended the lead to 4-0, after Stafford hustled down the line, beating out the throw to first on a fielder?s choice.

In the span of his three-game hitting streak, Winaker is 7-for-12 with three RBI. Because he is on fire at the plate could be a reason Pickler had Winaker in the leadoff spot. However, another reason is that Winker hardly ever strikes out. He only struck out in 11.2 percent of his plate appearances this season, which leads the Red Sox. Muno also extended his hitting streak to six games with the single in the first inning.

Y-D is on a tear, winning eight of their last ten games. They are one game back behind Harwich in first place.

The Red Sox face off against Falmouth on Friday at Red Wilson Field. First pitch is at 5 p.m.