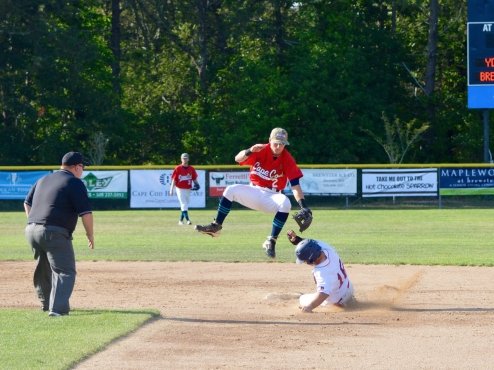 The Yarmouth-Dennis Red Sox (11-12) crushed the Brewster Whitecaps (10-11) 10-2 on Sunday night at Stony Brook Field to snap a 3-game road losing streak and move to third place in the East Division.

The Red Sox had 14 hits in Tuesday?s win which is more than any other game so far this season. With Stephen Wrenn (Georgia) going 3-for-4 and Connor Wong (Houston) going 3-for-3, the Sox lineup was explosive.

While Wrenn and Wong both contributed three hits, Ryan Noda (Cincinnati) contributed two runs and four RBIs with a 3-run home run in a huge third inning. Gio Brusa (Pacific) also sent a shot over the fence with a solo shot in the first inning.

With Brusa?s home run in his first at bat, he was hitting .412 in his last 17 at bats. That streak spans over his last six appearances before Tuesday?s win. Brusa walked twice in the victory and scored three runs.

Although Brewster wasn?t able to put together the runs, third baseman Nick Senzel (Tennessee) also went long against Sox starting pitcher Gabe Cramer (Stanford). The Red Sox pitching staff has allowed 16 home runs on the season which is 8.1 higher than the league average.

Cramer got his first start on Tuesday after appearing in six games, pitching 5.2 innings, out of the bullpen. He allowed three hits and one run, striking out five batters in 3.2 innings of work.

Cory Malcom (Arkansas Little Rock) came in for relief in the fourth inning and pitched 2.1 innings. The newcomer earned his first win for the Red Sox in his second appearance out of the bullpen.

Malcolm arrived on the Cape a few days ago and said that he has really enjoyed playing with Y-D so far. ?(They are) fun and awesome. It?s really exciting to be on the Cape doing everything together,? he said.

After losing in extra innings to the Whitecaps on June 19th, the Red Sox redeemed themselves with a convincing victory over the home team. The Red Sox are one win away from reaching .500 for the fourth time this season.

They take on the Brewster Whitecaps again on Tuesday night at 5 p.m. at Red Wilson Field as they look to reach that mark for the first time this season.