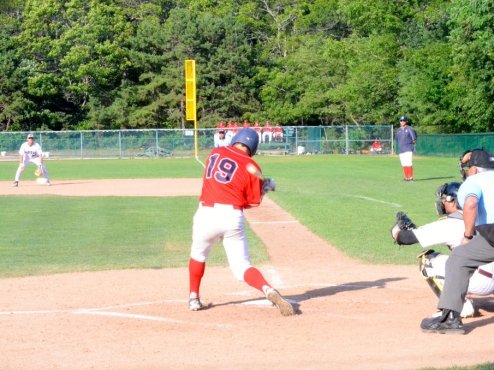 Persinger batted 4-for-6, while Stafford went 1-for-5 with a home run. Both tallied three RBI in the ballgame, respectively.

JJ Muno (UC Santa Barbara) also had himself a day, as he went 4-for-5 with two runs scored. Brent Diaz (Louisiana Tech) and Korby Batesole (Fresno State) were productive in their first start for the Red Sox. Diaz was 2-for-3 with three RBI, while Batesole went 3-for-5 with two runs scored. Y-D totaled 18 hits in the contest, setting a new season high.

William Montgomerie (Connecticut, 2-1) was nothing short of tremendous, as he tossed 6.2 innings, with four strikeouts and one earned run. He picked up his second win of the summer.

Colton Hock (Stanford) was on the bump for Cotuit. He pitched four innings, with three strikeouts and five earned runs.

Y-D wasted no time, pushing one run across the plate in the first inning. Muno tallied the first hit of the ballgame with a one-out single. After Stafford Jr. had hustled down the line beating out a fielder?s choice, Muno advanced to third. With a Persinger RBI single, Muno crossed the dish and gave the Red Sox an early, 1-0 lead.

The Red Sox struck again in the second frame. Batesole led off the inning with an infield single and advanced to second on a stolen base. On a nicely placed Connor Wanahanen (TCU) bunt, Batesole propelled to third and scored on a follow-up suicide squeeze laid down by Matt Winaker (Stanford).

It looked positive for Cotuit as they put their first run on the board in the third inning. Greyson Jenista (Wichita State) got aboard with one out and advanced to second on a wild pitch. With a Cal Stevenson (Arizona U.) single, Jenista scored, closing the Kettleer deficit to only two.

However, in the fourth inning Y-D registered four runs, which was the dagger in the heart of Cotuit. It all started after Batesole wheeled to third on a double with an error to lead off the inning. On the next at-bat, Wanahanen singled, which knocked in Batesole. Will Toffey (Vanderbilt) drew a two-out walk, and with one crack of the bat Stafford put the Red Sox ahead, 7-1. Stafford?s three-run blast put him at 18 RBI for the summer campaign.

The Red Sox continued to pour it on as they pushed two runs across the plate in the sixth and four in the seventh.

The Ketleers didn?t go down without a fight, as they scored a run in the bottom of the ninth, along with having the bases loaded. However, Cotuit was unable to notch any more runs due to darkness.

The Red Sox face off against the Wareham Gatemen at Spillane Field. First pitch is at 6:30 p.m.