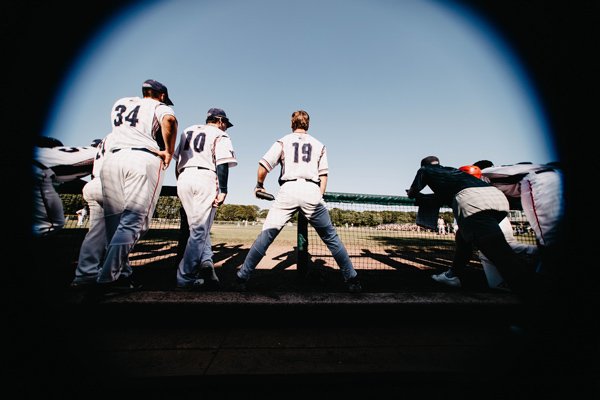 When fans arrived at Red Wilson Field on Tuesday to see the wind whipping the flag beyond the left-field scoreboard straight back, there was an anticipation of a high-flying slugfest between the Brewster Whitecaps and the Y-D Red Sox.

Instead, fans were treated to a low-scoring pitchers duel, as the two teams reached an impasse after nine innings with each team scoring just once.

Bryce Robison was phenomenal on the mound for Y-D, going five innings, his lone run allowed being unearned after a Jordan Thompson throwing error in the second.

Robison was forced to work out of the stretch for much of the night, navigating consistent traffic on the basepaths, but was able to keep it at a one-run deficit until his departure after the fifth inning.

“There’s a couple of mistakes that I made that ended up hurting me,” Robison said. “But overall, kept my team in the game to win.”

On the other side, Grant Taylor (same name, but different from Y-D’s Grant Taylor) was terrific for the Whitecaps. After facing the minimum through five innings, he ran into his only trouble of the night, with Mike Boeve reaching on a one-out double then scoring two batters later on an RBI single from Luke Shliger.

That was the only run Taylor allowed, and he finished his day with 12 strikeouts and no walks in six innings of work.

From the end of the sixth on, the content turned into a bullpen game. Even with the wind still swirling, threatening to turn any deep fly ball into a go-ahead home run, both bullpens continued to dominate the opposing lineup.

For Y-D, Zach Veen pitched two perfect innings. Luke Jewett entered in the 8th and faced the minimum in two innings with the help of a strike ‘em out throw ‘em out double play after he walked the first batter he faced.

After Taylor’s departure, Paul Gervase struck out six, allowing just one hit in three scoreless innings to preserve the tie and ensure each team a point.

While the wind going out presented a challenge for pitchers tonight, Robison said after the game that he was able to take advantage of some batters swinging for the fences and exploiting the subsequent holes in their swings.

“Definitely a thought warming up and everything,” Robison said about the wind. “It’s always fun trying to mess with the hitters and all that, cause I definitely think they try to get too big of swings.”

This was the third matchup with the Whitecaps this season, and the game followed a very similar path as the first two.

In games two and three of the season, Brewster jumped out to an early lead and clung to a small lead to come away with wins in low-scoring affairs.

Today, Y-D was able to hold the Whitecaps to one, but the offensive struggles that plagued them in those first two games resurfaced, albeit against two stellar LSU pitchers. The Sox struck out 18 times on Tuesday, a season-high. Y-D put the ball in play just 11 times.

The Sox didn’t just struggle to make contact, however. They made more mistakes on the basepaths that have been avoided up to this point.

Braden Montgomery stumbled diving back to first, getting picked off with his as his outstretched arm didn’t reach the bag.

Shliger and Cole Carrigg were both caught stealing at the tail end of strike ‘em out throw ‘em out double plays.

Boeve was called out after making contact with the catcher’s mitt on an attempted steal, sending Montgomery back to first right before his tumble.

Over the course of the season, these types of games will happen, and credit is due to the pitching staff for salvaging a tie in what will likely emerge as a fluky game for the sticks.

This was the first of three matchups with Brewster this week, with these games likely playing a part in how the rest of the division race shapes up over the rest of the season.

With the tie, Brewster remains four points behind Y-D, who has sat atop the East since June 25.

The Red Sox return to Red Wilson Field to wrap up a three-game homestand tomorrow when they face the Bourne Braves for the final time this summer at 5 p.m.