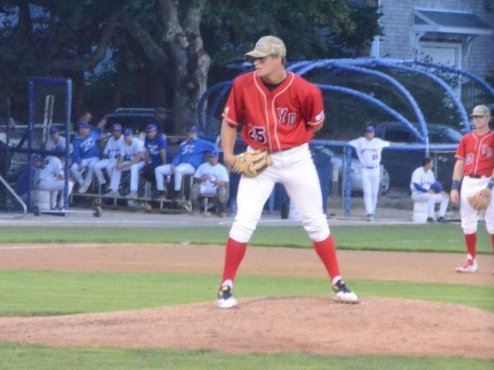 Jaskie tossed six scoreless innings, gave up three hits and whiffed eight Chatham hitters. He came out in the first in total control, retiring the first three Chatham batters 1-2-3. This set the tone on the defensive side of the ball, foreshadowing how it would be for the rest of his outing. Jaskie picked up his second win of the campaign in the impressive performance.

Caleb Gilbert (LSU, 0-2) got the start for Chatham, tossing for three innings, and was credited with his second loss of the summer.

Dylan Persinger (Cal State Fullerton) and Kevin Smith (Maryland) led the charge for Y-D at the plate, as both tallied two hits, respectively, while the Red Sox had 10 in the ballgame.

Y-D quickly took the lead in the first inning, pushing two runs across the board. Will Toffey (Vanderbilt) got it started after he drew a walk to get aboard first with two outs. With one swing of the bat, Deon Stafford (Saint Joseph?s) smoked a two-run blast halfway up the hill in right to put the Red Sox ahead, 2-0.

The Red Sox broke open the game in the third frame, knocking in five runs. Matt Winaker (Stanford) leadoff with a ground rule double, and on an infield error, JJ Muno (UC Santa Barbara) reached first while Winaker advanced to third. A Toffey RBI single plated Winaker, adding to their lead. An error in the outfield on the single sent Muno to third and Toffey to second with no outs. An RBI single poked by Smith (Maryland) pushed Muno across the dish, which stretched the lead to four. Y-D continued to pour it on after a two-RBI double ripped into the left-center gap by Persinger, while a follow-up Tyler Houston (Butler) single advanced Persinger to third. Persinger would score off of a Corey Dempster (USC) fielder?s choice, making the score, 7-0.

The Anglers acquired their first run in the seventh inning. Sean Bouchard (UCLA) stroked a double to the right field fence, and would cross the plate on a Donovan Casey (Boston College) RBI single.

In the eighth, Chatham struck again, with hopes of a comeback. A leadoff Jake Palomaki (Boston College) double along with a DJ Artis (Liberty) and Patrick Mathis (Texas) walk, loaded the bases with no outs. A pinch hit Tanner Gardner (Texas Tech) RBI single propelled Palomaki home. A wild pitch would cause the speedy Artis to score and Mathis to advance to third. Mathis would add another run to the Chatham total on a Gunnar Troutwine (Wichita State) fielder?s choice, closing their deficit to three. However, Nathan Kuchta (San Diego), who came in to relieve Collin Snider (Vanderbilt), got out of the inning with no damage done.

In the top of the ninth, Y-D would add some cushion. Winaker leadoff the inning being hit by a pitch, and on a Toffey grounder, would come around to score on an infield error.

Nathan Kuchta (San Diego) closed the door in the top of the ninth, recording his first save of the summer season.

The Red Sox hope to gain distance from the Mariners in first place as they faceoff against Harwich on Sunday. First pitch is at 5 p.m. at Red Wilson Field.?