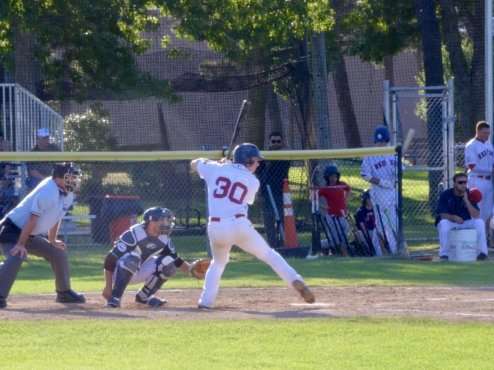 SOUTH YARMOUTH, Mass. ? The Falmouth Commodores made the trip to South Yarmouth for Wednesday night?s game against the Yarmouth-Dennis Red Sox. The Red Sox (0-5) looked to earn their first win of the season against the the Commodores (4-1), who had won their last two games and were coming off of a 5-0 victory against the Hyannis Harborhawks.

Cre Finfrock (Central Florida) took the hill for Y-D, opposed by Jake Bird (UCLA) for Falmouth. Finfrock recorded an impressive season for UCF, posting a 4.26 ERA with nearly a strike out per inning. Bird is coming off of his freshman season for the Bruins, where he posted a 6.36 ERA in 46.2 innings.

Before the game, Y-D Coach Scott Pickler mentioned that the key for Finfrock?s success this evening was movement on his pitches ? if his pitches were sinking and darting, he?d likely do well, but if they were flat Finfrock could be in trouble.

With a no-hitter in his six innings of work, Bird (1-0) took the win and Finfrock (0-1) took the loss in Falmouth?s 3-0 victory. Stephen Villines (Kansas) notched his second save of the season.

The Commodores struck first in the top of the second inning, as Matt Duce (Dallas Baptist) caught up to a fastball and launched it over the right field fence. After Matt McLaughlin (Kansas) drew a walk, Kevin Merrell (South Florida) followed with a double on a ground ball that snuck by Mikey Diekroeger (Stanford) at third. A fielder?s choice pushed across the second run for Falmouth.

Finfrock made it through 4.2 innings before being pulled for Teddy Cillis (Hoftstra). While Finfrock allowed two runs, his pitches looked sharp and featured great sinking movement. He generated 12 groundballs in his start, which is an incredibly high number relative to the number of balls in play that he allowed.

These groundballs likely stemmed from the sinking action on his pitches, as the drop causes hitters to make contact on the top half of the ball and drive it into the ground. Relying on generating groundballs is a viable strategy even at higher levels of competition, as many MLB pitchers are successful in inducing weak contact from hitters.

Falmouth added another run in the top of the sixth, when Tyler Lawrence (Murray State) hit a solo home run. Cillis then settled down and retired the next two batters.

Bird shut the Red Sox down for the first six innings, only allowing base runners on two errors. The Red Sox were close to pushing across a hit in the first and second innings, when Dylan Rosa (Kent State) and Kevin Smith (Maryland) hit hard line drives that were snared by Falmouth fielders.

But, the Red Sox recorded their first hit in the seventh after Keegan Baar (Michigan State) entered the game in relief. Matt Whatley (Oral Roberts) tagged a single to right field, and Diekroeger singled on a well-hit line drive. But, Baar was able to record two quick outs and the Red Sox remained without a run. That would be the extent of the offense tonight for Y-D, as the 3-0 score held for the remainder of the game.

While the Red Sox were able to muster only two hits, there certainly positives to take away as well. Although Finfrock walked four, his offspeed pitches looked excellent and had plenty of movement to keep the Falmouth hitters off balance. The offense struggled, but it was likely a result of Bird?s excellence and not a product of a poor approach by Red Sox hitters. The last two games have been encouraging, and the Red Sox seemed poised to come home with a victory on Thursday night.

The Red Sox will be back in action in Brewster tomorrow night for a 5 p.m. game against the Whitecaps.