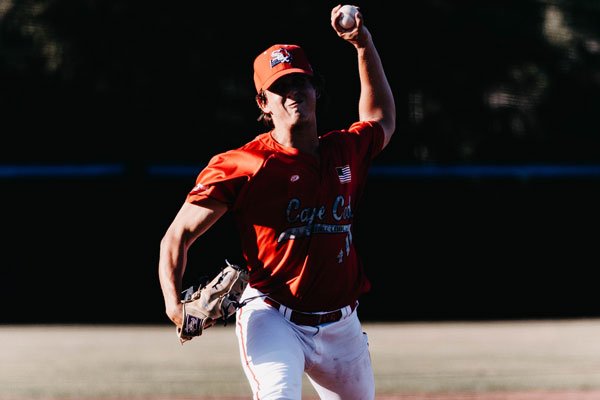 In what felt like one of the longest bottom of the eighth innings in baseball history, the Hyannis Harbor Hawks outlasted multiple umpire meetings, a delay for an injured official, and the ejection of their manager to put three runs on the board en route to a 5-2 win over the Yarmouth-Dennis Red Sox Sunday night at McKeon Park.

Grand Canyon’s Connor Markl started for Y-D, and held the Harbor Hawks to just one run over five innings. He showed off effective use of his changeup, but struggled a bit for control with four walks.

“He was on, he lost it for a little bit, he got it back,” Y-D Field Manager Scott Pickler said. “He kept battling back.”

Hyannis’ lone run against him came in the bottom of the fourth, when Dominic Pitelli placed a squeeze bunt with two outs perfectly down the third base line, beating it out for an infield single.

The Red Sox tied the game on a one-out double from Chase Meidroth. Meidroth, who worked a long at-bat to get to a full count, sat back on a breaking ball and launched it to deep left field. He missed a home run by just a few feet, but with Hunter Haas running on the pitch, he scored all the way from first.

But just as soon as that happened, Hyannis took the lead back. After two pitches to Nolan Schanuel, Pickler pulled Markl for Owen Hackman. But Hackman couldn’t get him out. Schanuel drilled the third pitch Hackman threw over the scoreboard in right field for a home run to give the Hawks a 2-1 lead.

The Sox threatened in the seventh, but couldn’t capitalize. They weren’t out of it, however, as they tied the game in the top of the eighth. After Hunter Haas drilled a leadoff double, he moved up to third on a wild pitch. Cole Carrigg drove him in with a single to left field, going with the pitch and sending it to the opposite field.

In the bottom of the eighth, home plate umpire Douglas Isham took a ball off his mask and was clearly shaken. He continued, but after the next batter walked, Isham decided he couldn’t stay out there. After a 20-plus minute delay, the game continued without Isham and just two umpires.

Because of the delay, Pickler went to his bullpen to bring in Zach Veen for Shaun Gamelin, who faced just two batters at the start of the eighth.

“I was okay with that, that happens,” Pickler said of having to change his gameplan by bringing in Veen due to the delay.

With runners on first and second, Jacob Campbell bunted down the third base line to try and move the runners over. An errant throw from Luke Shliger allowed Campbell to beat it out and advance up to second as the ball went out of play, and the officials ruled that, while one run scored as the throw sailed away, the runner from first (who also ran around and scored) had to go back to third because the ball left the field.

Hyannis field manager Eric Beattie came out of his dugout to argue the call, and was ejected by the two-man umpiring crew.

The next batter, Cole McConnell, lined a two-run single to center to extend Hyannis’ lead to three.

Despite getting two men on base in the ninth, the Sox couldn’t get enough going for a late comeback.