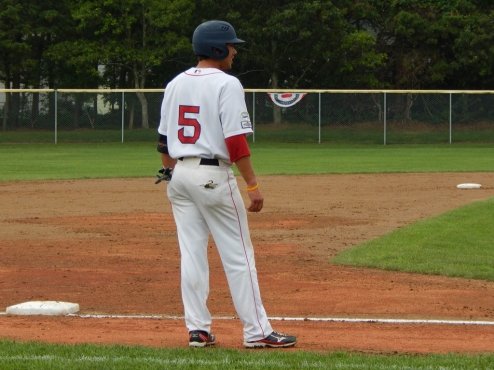 Alex Blandino had half of Y-D?s four hits Tuesday night in a losing effort versus the Brewster Whitecaps. The ?Caps had just as many hits as the Red Sox but escaped with a 1-0 victory. PHOTO: Katie Carlson/Y-D Red Sox

Brandon Liebrandt threw seven brilliant innings of scoreless ball for Brewster as the Whitecaps went on to shut out the Yarmouth-Dennis Red Sox, 1-0.

Erick Fedde started for YD and lasted just four innings, allowed one run on two hits, walked five and struck out three. The five walks ramped up Fedde?s pitch count, which forced Jordan Minch to come on in relief in the fifth.

The Whitecaps scored their only run in the third inning when Austin Bailey hit an RBI single, which turned out to be the only run to cross the plate for both teams. YD and Brewster combined for eight total hits and no errors.

The Sox threatened in the fourth inning when DJ Stewart tagged up from third base on a fly ball from Jose Trevino, but was gunned down by Boo Vasquez in right field.

Jordan Minch threw five shutout innings in relief of Erick Fedde, striking out four, and retired 13 of 15 batters faced. Minch was lights out and gave his team a chance to win, but the Whitecaps pitching was too much for the Sox to handle.

The Sox will be back in action tomorrow night as they welcome in the Chatham A?s at 5:00pm. Pregame starts at 4:35 in the broadcast booth with Cody and Chris.