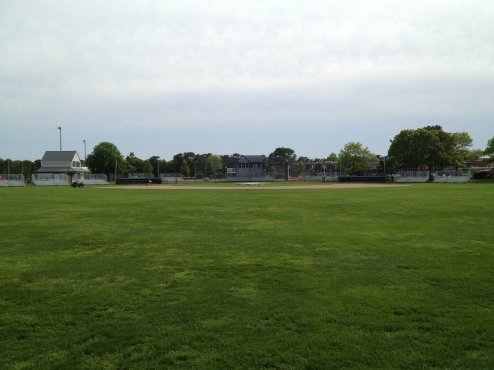 As Wednesday afternoon rapidly approaches, last minute preparations are being carried out at ballfields across Cape Cod, as the 2013 Cape Cod Baseball League season is set to kick off. The Yarmouth-Dennis Red Sox, the League?s eastern-most home team Wednesday, will play host to the Bourne Braves at Red Wilson Field, with first pitch scheduled for 5:00 PM Eastern Time. Bourne is celebrating its 25th anniversary, with the franchise?s inception coming in 1988.

The behind-the-scenes staff of the Yarmouth-Dennis Red Sox would like to welcome all fans to the 2013 season and look forward to seeing everyone at Red Wilson!

After winning the 2012 CCBL Eastern Division, and only 2 outs away from the Cape Cod Baseball League Championship Field Manager, Scott Pickler (Cypress College) returns for his 16th season. Returning for his 17th year is Assistant Field Manager,? Chris Podeszwa of UCONN.

The Cape Cod Baseball League is known for its quality recruiting of the finest collegiate athletes and 2013 is no exception. Once again, Coach Pickler has assembled our team from some of the finest college players in the nation. Each and every year our goal is to win the Cape Cod Baseball League Championship. This by no means is an easy task given the parity in this prestigious summer league.

We continually strive to update Merrill ?Red? Wilson Field and are able to do so with the much appreciated support of our local business community, fans, and outside individual donations.

Having held the position of? ?Treasurer? before becoming the General Manager, no one appreciates the efforts of Bob Beauchemin, our current Treasurer? and a Certified Public Accountant, more than I do. Bob puts in countless hours throughout the year and without a doubt is ?The Best Treasurer? in the Cape League.

To the Superintendent of Schools Carol Woodbury, we wish her a wholehearted ?Thank You? for supporting our program. A special thank you to our D-Y School Committee for the confidence they have placed in us.

On June 29th we have planned a very special night with the Red Sox facing the Brewster Whitecaps, a special visit from ?Wally the Green Monster?. The night is highlighted by a tremendous set to music and ground and aerial fireworks display. Be sure not to miss the June 29th?s festivities. Also, Y-D will be the Host of the 2013 Cape Cod Baseball League All-Star Game to be held on Saturday July 27th with yet another Fireworks display that evening.

As always, I would be remiss without a heartfelt ?Thank You? to our many Volunteers, Interns and Committee personnel who give of themselves unselfishly to make the Y-D Red Sox one of the premier franchises in the Cape Cod Baseball League. But enough of this! It?s time to sit back, relax and watch the purest? form of Baseball in America before money spoils the game. So? ?PLAY BALL?!

The 2012 Yarmouth ? Dennis Red Sox season came to a bittersweet end when the Wareham Gatemen came back in extra? innings to win the CCBL title here at Red Wilson Field. Although this was not the outcome we here at YD had hoped for, but for 5000 Cape League fans, and myself we witnessed one of the best Championship games ever played here on Cape Cod.

Thanks to the ?juiced ball? Cape League fans enjoyed a nightly barrage of home runs throughout the entire 2012 season and all time records were broken within many franchises in the league.

This year the Yarmouth ? Dennis Red Sox will be hosting the? Friendly?s 2013 CCBL All Star Game to be held at Red Wilson Field on July 27th. YD last hosted this event in 2006 and we are? honored to have the privilege to be hosting the Cape League?s premiere event. There will be many activities throughout the day including the homerun hitting contest, autograph session, and silent auction to name a few. At the conclusion of the game,? thanks to a grant from the town of Yarmouth?s tourism fund there will be a spectacular fireworks display.

This year also marks? the third year of the Yarmouth Summer Celebration hosted by the Yarmouth ? Dennis Red Sox with a week of daily activities,? fireworks and some great baseball.

I would like to welcome back field manager Scott Pickler and assistant coach Chris Podweszwa. ?Pick? and ?Dez? know how to bring the ?best? out of the players that come to play here at YD and work tirelessly to help prepare these young men for their futures.

I would like to thank the towns of Yarmouth and Dennis for their continued? support of this organization and the Dennis ? Yarmouth Regional School District for allowing us to play here at Red Wilson? Field. Thank you to the YD committee and our many volunteers, host families, and local area businesses for their continued? support in making the Yarmouth ? Dennis Red Sox one of the best summer baseball teams in the country.