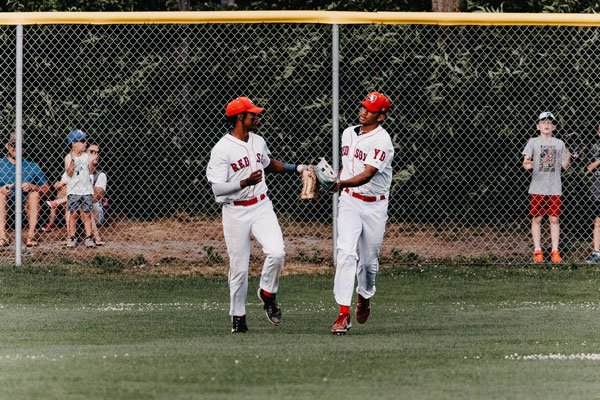 Despite a tie with Harwich in the two teams’ final meeting of the summer and a loss to Hyannis at Dunkin’ Donuts Park in Hartford, the Yarmouth-Dennis Red Sox managed to win each of their next two games to move within a point of clinching a playoff berth, and six points away from clinching the East Division title.

First, the Red Sox beat Cotuit, 5-1, at home. What started as a pitcher’s duel ended with the Red Sox putting up three runs in the bottom of the sixth to blow the game open.

Then before the All-Star Break, the Red Sox scored seven runs in the second inning against Wareham en route to a 11-1 victory. Y-D’s 15 hits against the Gatemen set a new season high.

Bush continued his recent hot streak, with seven hits in four games. He drove in four runs, walked twice and stole a base. He capped off the strong weekly performance with a four-hit day against Wareham, a new season-high.

Bush’s hot stretch has raised his season batting average to .324, and his on-base percentage to .415. For more about Bush’s recent success, visit here.

Over the past week, Montgomery has finally had the chance to show off his two-way talent. At the plate, he hit .357 with two homers and six RBI, including a grand slam against Wareham. On the mound, Montgomery pitched two innings and struck out four while allowing one run.

His power bat has been a key middle-of-the-order presence for Y-D, and the ability to bring him in to pitch as well is an added bonus.

With so many pitchers departing due to the MLB Draft, the Y-D bullpen has been a bit undermanned. That’s why Calhoun’s emergence as a reliable reliever was so important over the last week. He pitched 3.1 solid innings in the tie with Harwich, striking out four and allowing just one hit, but running out of gas late. Then in the win over Wareham, he tossed two no-hit innings in relief.

His season numbers are a bit inflated due to an early rough outing, but Calhoun has been steady recently for the Red Sox.

With just over a week left in the regular season, Y-D has two things to lock down. First, a playoff berth — just one point would put them out of the reach of last-place Chatham, even if the Anglers win all their final eight games.

Second is the East Division. The Red Sox are 11 points ahead of second-place Brewster, and with eight games remaining there’s a possible 16 points up for grabs for each team. To put themselves completely out of reach of the Whitecaps, the Red Sox need six points — a combination of their own points, or points Brewster drops due to losses or ties — to secure the division title. It would be Y-D’s first division title since 2018.

But there are still tough tests remaining on Y-D’s schedule. Monday’s game with Cotuit is important for both teams, as Cotuit is also vying for a division crown. A home-and-home with Orleans later this week is important for both teams’ playoff positioning. And games against Hyannis and Brewster at the end of the schedule could be a tough task, if the Red Sox haven’t taken care of business beforehand.

The West Division has a race for the top, as Hyannis usurped Cotuit to take over first place. The Harbor Hawks also became the first team to clinch a playoff spot this past week.

In the East, the race for the bottom-four places has tightened. Second-through-fifth place is separated by just five points, and last-place Chatham sits just one point outside of a playoff spot.

1 thought on “Week 6 Recap: Red Sox on the verge of securing playoff berth”