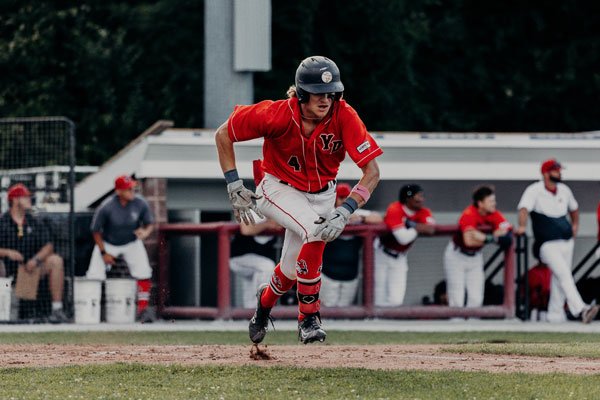 A short five-game week gave the Yarmouth-Dennis Red Sox a huge opportunity to increase their lead at the top of the East Division standings. Technically, that did happen — the Red Sox now have a four-point lead over the Brewster Whitecaps in second, more than the three-point lead they had at the start of the week. But the results in a 2-1-2 week could have allowed the Sox to increase that lead even further.

The Red Sox opened the week with a 3-2 win over Falmouth on the road, before losing and tying Harwich in a home-and-home. They bounced back with a 4-2 win at Wareham, before tying Chatham at home to finish the week.

Carrigg amassed seven hits over five games and drove in five runs. He doubled twice and stole two bases. In the tie with Harwich, he did a bit of everything: Carrigg went 3-4 with a double, a run scored, two RBI, and two stolen bases.

His performance this week leaves him with a .310 average, good for fourth in the Cape League. His 13 RBI are second on Y-D, one behind Jonny Long. And his 13 stolen bases are second in the league. Carrigg has been one of the most important players on this Y-D team halfway through the summer.

Making the first start of the week in enemy territory, Yost dazzled for Y-D at Falmouth Wednesday night. He limited hard contact and kept the ball on the ground for most of the game. He induced three double plays throughout his 6.2 innings of work, struck out two, and allowed just one unearned run. In his first three starts, though he never pitched poorly, Yost came away with the loss. This time, the bullpen did its job and got Yost the win.

Lyons struggled in his first inning of work Saturday night at Wareham, giving up two quick runs. That’s about all the Gatemen could manage against the righty, as Lyons shut them down over six innings. He only struck out two, but controlled traffic after the first. He escaped a bases-loaded, one-out jam in the fourth without any runs coming across, and sent down the last eight in a row. Lyons lowered his ERA to 1.84 in 24.1 innings for the Sox this summer.

Three huge tests await the Red Sox this week: Brewster, Brewster, and Brewster. The Red Sox and Whitecaps haven’t faced each other since June 14, but they have three upcoming dates — two at Stony Brook Field. With the Whitecaps just four points behind Y-D in the East standings, these games are a crucial test for the Red Sox.

Also this week, Y-D faces Bourne for the first time since June 21, and for the final time this season.

The Sox hold their grip on first place in the East, while race has narrowed in the West. A winless week for Cotuit allowed Hyannis to surge within one point of first place.