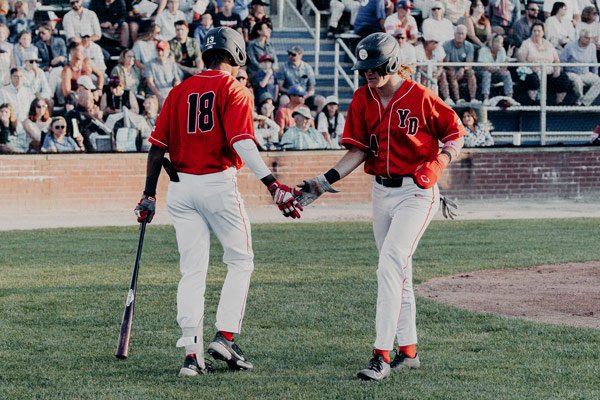 The Red Sox continued their hot stretch of play early in the week, winning three of the first four games they played. They began the week with a bang, dominating Harwich at Whitehouse Field for a 9-0 win.

After losing to Cotuit, Y-D won back-to-back nights at Chatham and Orleans to open a five-point lead in the East division.

The rest of the week was not as kind to the Red Sox. Saturday against Wareham was the worst pitching performance of the season, an 11-3 loss to the Gatemen. In a home-and-home series with Hyannis, the bullpen struggled, allowing three in the eighth in a 5-2 loss on Sunday before allowing two in the ninth in a 5-5 tie on Monday to end the week at 3-3-1.

Haas had already made his mark on the Cape with solid defense up the middle but is now flashing some power as well. Haas hit safely in all seven games over the past week, including his first home run since his freshman season at Arizona State last spring,

Haas hit .375 while slugging .583, scoring five runs, and driving in three while moving up to the top third of the lineup.

Robison now has an ERA of just 1.08 on the Cape this summer and has earned a spot near the top of the Y-D rotation.

After an impressive two outings out of the pen to begin the summer, Romero was equally as impressive in his first start of the season, going five shutout innings and allowing just two hits against Harwich on Tuesday.

Romero now has 10.1 shutout innings to his name this season and is posting a WHIP of just 0.77. He’s also earned a spot in the Y-D rotation.

Y-D has a winnable stretch of games coming up, with five straight games against teams in the bottom two of their division.

It begins on Wednesday with a trip to Falmouth, followed by a home-and-home with Harwich. The Sox then make their first trip over the bridge to Wareham on Saturday before hosting Chatham on Sunday.

After a bumpy 0-2-1 end to this last week, the Sox will look to take advantage of this next week and try to extend their lead in the East Division.

The Red Sox welcomed multiple new faces to the Cape this week, while also releasing some players who had seen time on the field this summer.

Cotuit remains the best in the West, but Hyannis has cemented their place at second in the division, going 6-1-3 over their last 10 games. In the East, Y-D remains in first place, and it’s shaping up to be a three-team race for the division title.

The CCBL All-Star Game is on July 23 at Spillane Field in Wareham. Tickets are now available on the Wareham website.