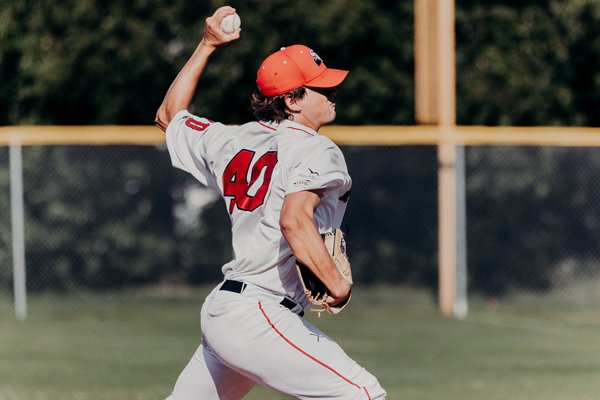 Since limping out of the gate to an 0-3-1 start, the Y-D Red Sox have been the best team on the Cape, going 5-1 in the past week to improve 8-1-1 over their last 10 games and propel them into first place.

After a comeback victory against Bourne, the Sox fell to Orleans before rattling off wins against Chatham and Cotuit and sweeping Falmouth in a doubleheader on Sunday.

Over those six games, the Sox staff only allowed 12 runs to score, bringing their team ERA on the season down to 2.07, 2nd in the league. In games where Y-D has scored at least two runs, they are 8-0-2.

“This is the best staff I’ve ever been a part of,” GCU’s Connor Markl said after throwing six shutout innings on Sunday.

Y-D Field Manager Scott Pickler broke the all-time record for most managerial wins in Cape League history on Saturday in Cotuit. A pre-game ceremony to honor Pickler is scheduled for before Wednesday’s game at Red Wilson Field against the Kettleers.

After making his debut last week, Bush Jr. has seen regular time at center field and in the leadoff spot. In five games last week, he went 6-16 with two RBI and five stolen bases, including four in an 8-4 win over Bourne.

Bush Jr. has also displayed some grit and toughness, staying in a game after colliding with the center field fence. He also returned to the lineup one day after chipping a tooth before Friday’s game against Chatham.

With a .421 OBP, blazing speed and range in the outfield, Bush Jr. is cementing his place atop the Y-D lineup and in center field.

In his first two appearances of the season, Veen has pitched well out of the pen, allowing just four hits and no runs over 4.1 shutout innings.

In Friday’s 3-2 win over Chatham, Veen earned the victory after getting the final out in the 6th and tossing three scoreless innings the rest of the way, striking out six and allowing just two hits.

After winning Pitcher of the Week in week 1, Lyons made his case to earn the honor again with a dominant performance against Falmouth. Lyons struck out 12 Commodores, including seven straight at one point, over six innings of shutout work, allowing just one hit and walking two.

After struggling in his first start of the summer in Bourne, Markl made his mark in game two, also tossing six shutout innings allowing one hit while striking out eight and walking just one.

The Red Sox are scheduled to play on seven consecutive days, beginning with a trip to Harwich tomorrow. They’ll host Cotuit on Wednesday before a short two-day road trip that includes trips to Chatham and Orleans.

Fourth of July weekend has Y-D at Red Wilson Field twice against Wareham and Hyannis, with a trip to Hyannis lodged in between on Saturday.

Y-D did it in come-from-behind fashion, turning an early 2-0 deficit into a 5-3 victory.

“I’ve been very lucky for 24 years to have great players, great assistant coaches,” Pickler said after the win. “There’s all kinds of great coaches in this league, better coaches than me. I’ve got more years than all of them, that’s the reason I have this record.

“It’s not me, though, it’s the players and the assistant coaches that make it so rewarding.”

Read Mike Puzzanghera’s piece for more on the legacy that Pickler has left not only on the Cape but on the baseball landscape beyond Eastern Massachusetts.

Cotuit suffered their first two defeats of the summer, but they remain the class of the West division. Y-D has taken a slight advantage atop the East, and Brewster, Orleans and Harwich all remain packed tight together in the middle of the division.