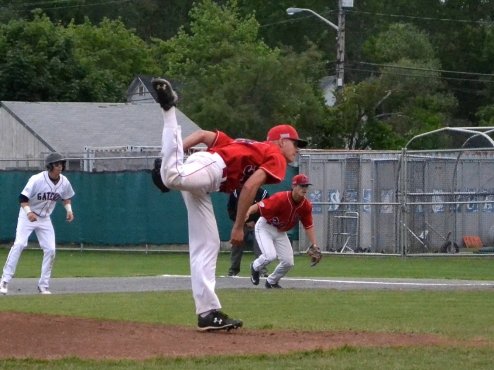 The Wareham Gatemen (9-8) snapped the Yarmouth-Dennis Red Sox?s (7-9) win streak last night with a 4-2 victory over the visiting team at Spillane Field in Wareham.

The Gatemen took an early lead with three runs in the first inning and never looked back. Sox starting pitcher Dustin Hunt(Northeastern) allowed three hits and one walk in the first which led to three Gatemen runs. One of those runs was unearned after a throwing error by left fielder Luke Bonfield(Arkansas).

Hunt started on the mound for the Red Sox and was responsible for all four runs before being replaced by reliever Evan Bell(Stanford) in the fourth inning. Hunt allowed six hits, walked one batter, and had three strikeouts in three-plus innings of work.

The Red Sox couldn?t make anything happen against Wareham starter Evan Hill (Michigan). Hill went five innings, only allowing two hits.? Y-D only managed to get hits in three innings, only one of those coming against Hill.

Despite the slow start, the Red Sox had a big rally in the sixth inning that put two runs on the board and almost brought them even with the Gatemen. The sixth inning rally for two runs came from only one hit and two walks.

With only four hits on the day, all coming from different players, the Red Sox were not putting enough men on base to score the runs they needed. Over the last nine games, the Red Sox are 3-4 when they have less than 10 hits.

The Red Sox will play the Chatham Anglers (9-7) at 5 p.m. at Red Wilson Field on Sunday as they look to bounce back after a poor performance in Wareham.