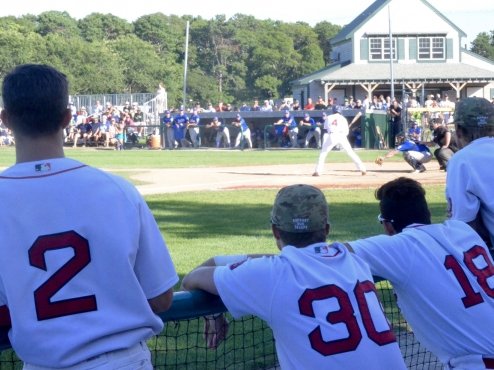 On the back of six strong innings of work by starting pitcher Will Montgomerie (Connecticut) and two doubles by Corey Dempster (Southern California), the Red Sox defeated the Chatham Anglers, 4-1, on Tuesday night to sweep the East Division Finals and advance to their third straight league championship. The Red Sox raced out to a quick lead and didn?t look back, holding the Anglers to just three hits in the game.

The Y-D offense wasted no time getting going, as JJ Muno (California Santa Barbara) led off the game with a single into center field. On just the third pitch of the evening, Kevin Smith (Maryland) smashed a double into the gap in left-center, scoring Muno from first base. Two outs later, Deon Stafford Jr. (Saint Joseph?s) drove in Smith with a single to center, giving the Red Sox a 2-0 lead. Stafford tallied two hits in his first start since exiting with an injury on July 31.

Dempster pounded one of his two doubles on the night to right field in the second inning and a single by Joey Thomas (Cincinnati) gave the Red Sox runners on the corners. Muno laid down a perfect sacrifice bunt up the first base line, allowing Dempster to slide across home plate safely and extending the lead to 3-0.

Montgomerie looked like he was in trouble in the fourth inning, as a walk to Jeremy Vasquez (Florida) put runners on first and second for the Anglers. In the confusing series of events that followed, Y-D Manager Scott Pickler appeared to bring to the attention of the umpires that Chatham had batted out of order earlier in the inning. The runner on first base was called out, ending the inning and allowing Montgomerie to escape unscathed.

A RBI groundout in the fifth inning allowed Chatham to tally their lone run of the ballgame, as Smith made an excellent play at shortstop to retire Donovan Casey (Boston College) while Jake Palomaki (Boston College) came across to score from third base.

With two outs in the top of the ninth, Nolan Brown (Texas Christian) drew a walk from Chatham reliever Garrett Whitlock (Alabama-Birmingham). Dempster followed with a double down the left field line and the speedy Brown cruised around the diamond to score from first base, pushing the Red Sox lead to 4-1.

Sam Delaplane (Eastern Michigan) worked a 1-2-3 ninth inning to nail down his first save of the postseason. Montgomerie earned the win in his first playoff appearance and Lincoln Henzman (Louisville, 0-1) took the loss for the Anglers.

Montgomerie looked excellent again for Y-D, showing pinpoint command and effectively limiting base runners. He finished the regular season with a 1.70 ERA and was one of the Red Sox?s most reliable starters, as he allowed just two runs from June 22 through his start on Tuesday night.

Tonight?s victory secures Pickler?s eighth trip to the Cape Cod League Championship in twelve years, with Y-D coming away with five titles in that span. The Red Sox look to become the first team to win three straight championships since Cotuit won four straight from 1972 to 1975.