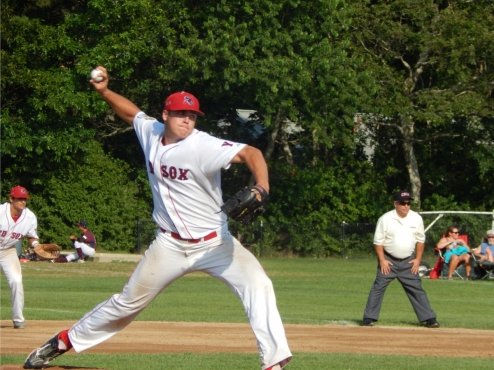 Jose Trevino went 2-3 and knocked in four runs in a breakout night for the Oral Roberts product in route to a 7-4 victory over Harwich. The win moved the Sox one point out of second place in the Eastern division.

Harwich struck first in the top of the third inning on a sacrifice fly off of YD starter Sam Lindquist by Ian Happ, scoring Gunnar Heidt from third.rnrnAJ Reed started for Harwich and didn?t allow a hit until the fourth inning when the Sox topped him for four runs on four hits. Auston Bousfield led off the fourth with a double who would come around to score on Trevino?s bases clearing double.

Brandon Downes added two more in the fourth with a two run homer of his own. The score remained knotted up at 4-1 into the bottom of the eighth inning when the Sox blew the game open scoring three more runs, taking a 7-1-advantage heading into the top of the ninth.

Harwich put together a small rally in the ninth, scoring three runs, but Darrell Hunter came in for Dan Altavilla and shut the door and picked up the save.

The Sox are back in action tomorrow night in a makeup game versus the Bourne Braves. First pitch is set for 5:00pm.