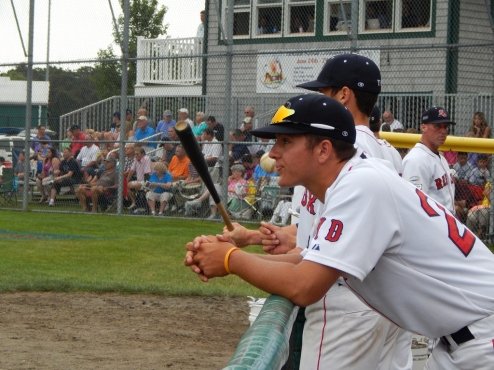 The Y-D Red Sox came away with a 6-4 victory over the Chatham Anglers at Red Wilson Field Wednesday night. PHOTO: Katie Carlson/Y-D File

The Yarmouth-Dennis Red Sox beat the first place Chatham Anglers 6-4 on Wednesday night with the help from an offensive explosion from Jose Trevino and Brandon Downes.

Trevino picked up three singles and scored a run as he went 3-4, while Downes hit a big two-run home run in the fourth inning that turned out to be the difference in the ballgame.

The Sox scored in three out of the first four innings with one in the 1st, three in the 3rd, and two in the 4th? off of A?s starter Andrew McGee. Dominic Moreno and Mitch Merten would blank the Sox for the remainder of the game throwing four shutout innings.

With a 4-0 lead going into the fourth inning, the A?s pushed a run across to make it 4-1. Downes would come through with a big two-run homer in the bottom half of that inning to give his team a five-run lead at 6-1.

Chatham?s Josh Eldridge gave the A?s some life in the sixth with a three run blast to cut the deficit to two, down 6-4. YD?s Darrell Hunter would put any hopes of a comeback to rest as he picked up his third save on the summer, throwing three shutout innings of no-hit ball.

The Sox have the day off tomorrow night and are back in action Friday night as they travel to Wareham. First pitch is set for 7pm.