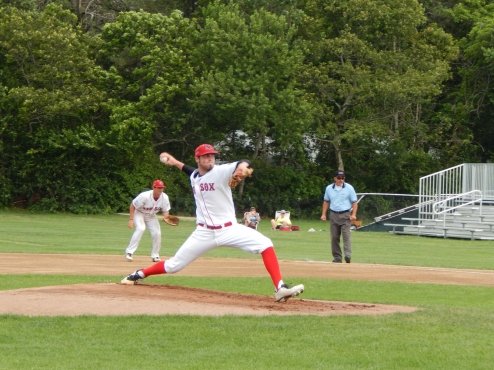 After being shutout for the first six innings of Sunday night?s ballgame, Jose Trevino hit a two-run double to give Yarmouth-Dennis a 4-2 lead in the 8th over Wareham. Wareham?s Trey Killian threw six scoreless innings for the Gatemen and was in line for the win before Sean Newcomb allowed four YD runs to cross the plate in the 7th and 8th innings combined.

The Gatemen struck first in the second inning when Coonrod walked in a run. Wareham struck again in the 3rd with an RBI single off the bat of Adam Toeth where Chris Chinea came around to score. From there, the Gatemen would be shutout until the 9th inning.

Kevin McAvoy came on in relief of Coonrod and was brilliant. McAvoy threw 5.1 innings of 3 hit ball, allowing just one run and struck out four. It was McAvoy?s first appearance at Red Wilson Field, who made a solid impression on the YD Sox faithful.

With McAvoy?s effort, the YD offense woke up in the 7th inning with a pinch-hit RBI double from Andrew Daniel to put the Sox on the board and cut the deficit to 2-1. After a scoreless top of the 8th from McAvoy, YD put up three more runs of their own in the bottom half to take a 4-2 lead.

That would be all Darrell Hunter would need as he shut the door in the 9th and the Sox went on to win their 5th straight home game, 4-3.