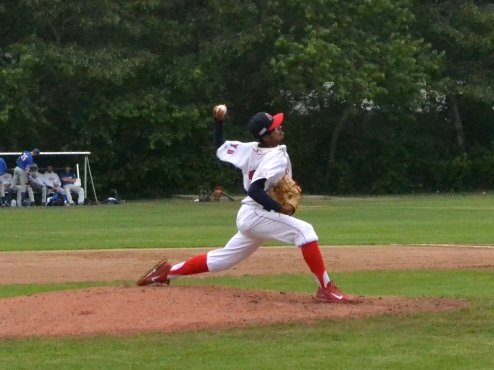 The Fourth of July win improves the Red Sox to 10-12, while Hyannis falls to 13-9 on the campaign.

?We put ourselves in good situations to get runs,? said Gio Brusa (Pacific), who scored twice en route to the victory. ?Last night, it didn?t work out, but tonight it did. That?s the game of baseball. Sometimes it happens, sometimes it doesn?t.?

Yarmouth-Dennis wasted little time in getting on the board, plating its first run in the second inning. After consecutive singles by Stephen Wrenn (Georgia), Will Toffey (Vanderbilt), and Ryan Noda (Cincinnati), Nathan Rodriguez stepped up to bat. The Arkansas catcher sent Devin Smeltzer?s 2-1 offering to right field for a sacrifice fly to plate Wrenn and give Y-D the early lead.

Thomas (Fresno State) stole the show on the mound, surrendering only three hits and fanning out three. A rising sophomore, 56 of his 96 pitches were strikes. He posted two 1-2-3 innings, ultimately earning the win and improving to 4-0 on the season. Thomas was relieved to start the eighth by Alec Eisenberg (Hofstra), who set the stage for a ninth-inning appearance on the bump by Doug Willey (Franklin Pierce).

Smeltzer (Florida Gulf Coast) was tagged with the loss for the Harbor Hawks, dropping to 2-2. The Voorhees, N.J. native threw six innings and allowed only two earned runs.

The Red Sox return to action Sunday, opening a home-and-home series with the Brewster Whitecaps. First pitch is scheduled for 5 p.m. from Stony Brook Field.