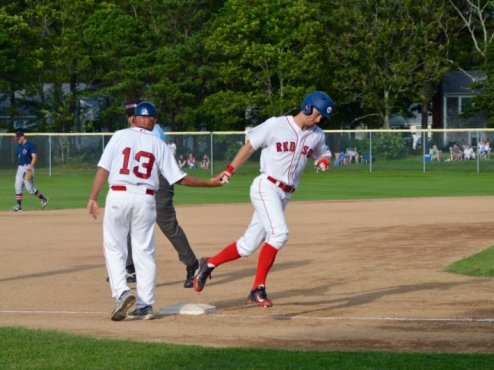 The Yarmouth-Dennis Red Sox (17-15) bounced back after a tough loss to win at home against the Harwich Mariners (13-18) on Saturday night.

The 4-1 victory was Y-D?s sixth win in seven games. In front of the largest crowd of the season, Ricky Thomas (Fresno State) earned his sixth win of the summer. Thomas is the first Cape League pitcher to win six games and was selected as a reserve for the All-Star game on Saturday morning.

?I was definitely honored but I have to give thanks to my teammates because without them I wouldn?t be in this situation. It?s a great opportunity and I?m glad I made it,? said Thomas.

Thomas pitched seven full innings, allowed only three hits and one run, and struck out nine batters. He is averaging 0.96 strikeouts per inning and coincidentally has a season ERA of 0.96.

When asked about the consistency he has brought to the Y-D pitching rotation he said, ?As long as I fall into a rhythm everything should be good to go. I try to keep grinding and keep having success.?

Ben Bowden (Vanderbilt) came in to pitch the last two innings of the game and has established himself as a great closer for the Red Sox. He struck out the first five batters he faced before giving up two hits. He earned the save and has yet to allow a run in 8.1 innings of work this summer.

With only eight hits, the Red Sox offense was slow but was aided by Stephen Wrenn?s (Georgia) fourth inning home run. It was Wrenn?s fourth home run of the season, which is one behind Gio Brusa (Pacific) who leads the team with five.

Cole Billingsley (South Alabama) extended his hitting streak to 14 games but is trying to keep the focus off of his individual success. ?It?s not about me. I just do anything to help the team win. I don?t really think about (my streak). I just try to make it about the team and be a selfless player.?

Billingsley will start at center field in the All-Star game at Spillane Field in Wareham on July 25th. Tommy Edman (Stanford), Donnie Walton (Oklahoma State), and Brusa will also be in the starting lineup.

The Red Sox will take on the league-best Orleans Firebirds (23-9) tomorrow at Eldredge Park in Orleans. The Sox are 1-4 against the Firebirds this season and look to add another victory to that record in the two teams? last matchup of the regular season.