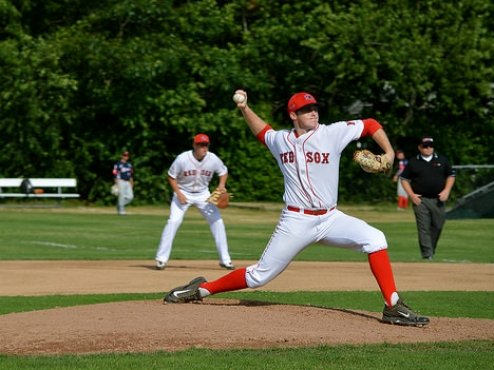 Despite scoring 33 runs in the past 4 games, Y-D?s offense was quieted by Bourne?s Travis Bergen (Kennesaw State University). Bergen shut out the Sox over six innings. He only allowed two hits and struck out six. In the six innings Bergen was on the mound, Y-D was only able to get three Red Sox on base.

The Braves had a two-run second inning, giving them the early led and eventual game victory. Brett Sullivan (Pacific) brought Blake Davey (UCONN) home with a groundout. Stephen Wrenn (Georgia) flew a ball out to the gap in right center field and Y-D?s Andrew Stevenson (LSU) dove and made the catch but Harrison Bader (Florida) was able to score, giving Bourne the 2-0 advantage.

Bourne tacked on two more runs in the third inning. Richie Martin Jr. (Florida) hit a first-pitch home run and a sacrifice fly by Davey to bring in Fleming. The final run of the Saturday night game was due to two Y-D errors that allowed Sutton Whiting (Louisville) to score.

The Red Sox will be traveling to Brewster tomorrow night to face the Whitecaps. First pitch will be 5pm at Stony Brook Field.