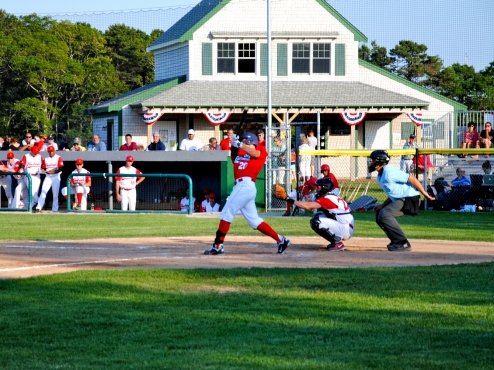 Robert Pehl hit a homerun off the Red Wilson Field scoreboard Friday night, but it was the Orleans Firebirds who combined for two grand slams to earn the win. PHOTO: Isobelle Hemmers/Y-D Red Sox

There were runs scored tonight at Red Wilson Field.? A lot of runs.? 29 total runs and 30 total hits were tallied up when the Orleans Firebirds traveled to Yarmouth to take on the Red Sox in the Sox 8th game of the season.

The Firebirds beat the Sox earlier on this season 3-0 in Orleans and the Sox looked to even the season series 1-1.? But things didn?t go the Sox way and it started right off the bat.? After getting the leadoff man for the Firebirds to groundout, starting pitcher, Sam Coonrod, then walked the bases loaded.? Zach Finch, the Firebirds Right Fielder, came to the plate and hit a hanging breaking ball deep into the trees beyond the right center field fence for a grand slam and an early 4-0 lead after the first half inning. And that was all she wrote for Coonrod.? He only lasted ? of an inning in the ball game.

The Sox then got a few of those runs back in the bottom of the first after Matt Honchel led off with a double and then a batter later, Robert Pehl doubled him in and later came in to score in the inning decreasing the Orleans lead to two after a full inning.

The game was tied in the third inning when the Sox struck for two more after a leadoff walk to Bradley Strong.? Strong then proceeded to steal second and third, and then Kyle Wood singled in Strong and later came in to score himself after a DJ Stewart one-out-double.? After three full innings, the game is now tied at four.

But not for long.? In the top of the fifth inning, the Firebirds would strike with another blow.? After a walk, a single, and a walk to the the 1-3 hitters, clean-up man, Chris Marconcini came up to the plate and blasted a no-doubter over the right center field fence, high up into the trees for the second Orleans grand slam of the game. Increasing their lead to five, 9-4.

The teams were both hitting the ball around extremely well, with both teams tallying up 15 hits.? It seems as though the transition from aluminum to wood bats has passed and these players have come to get more comfortable with the wood.?

Robert Pehl hit the second Y-D home run of the season, hitting a rocket that slammed off of the top of the scoreboard in right field.? He went on to go 2-5 on the day with a double and that home run.? DJ Stewart also had himself a day going 2-5 with two doubles.

The pitching wasn?t outstanding as both pitching staffs gave up a lot of hits which led to a lot of runs.? The final in tonight?s game was 17-12 as Orleans took the ?W.? Orleans is now 4-3 and Y-D slips down to 3-5 on the season.? The Sox are back in action tomorrow night (6/22) when they travel to Brewster to take on the Whitecaps at 5 p.m ET.? Check the Y-D Facebook and Twitter pages for updates on this game.