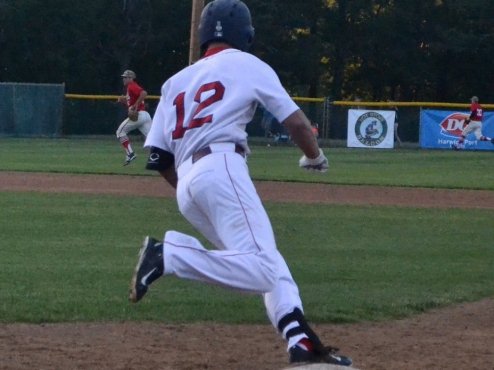 The Yarmouth-Dennis Red Sox (15-14) won a close game in front of over 1,600 fans at Whitehouse Field in Harwich on Tuesday.

The 5-3 victory over the Harwich Mariners (12-16) took over three and a half hours but finally ended when Ben Bowden (Vanderbilt) struck out the only batter he faced. Brett Adcock (Michigan) started on the mound for the Sox and Coach Scott Pickler used four pitchers out of the bullpen.

Adcock went 4.2 innings and allowed one run on Tuesday. This was his first start after allowing 12 hits and six runs in three innings against the Brewster Whitecaps (15-14) on July 7th.? When asked how it felt to have a good performance after last week?s loss he said, ?I didn?t have my best stuff today. I struggled a little bit with command but it felt good to not give up 12 hits in three innings. I just tried to attack the zone and stay confident in all my pitches.?

Pickler went to the bullpen in the fifth with two outs. Adcock commented on the coach?s decision to pull him by saying, ?It would have been nice to stay in and get the last out but I was wild and couldn?t throw strikes so it was the right thing to do. I couldn?t get my rhythm back and I knew that Alec (Eisenberg) would be fine getting me out of it.?

Alec Eisenberg (Hofstra) came in with two outs and two runners on base in the fifth inning. He walked a batter and allowed one run in one inning but it was enough to earn the win.

After the game Eisenberg talked about what it is like coming in as a reliever in that kind of situation. He said, ?(I) just had to get ahead and throw strikes, focus on the guy at the plate, not really worry about who?s on, and get the job done for your team.?

The Red Sox used a four-run fifth inning rally to edge out the Mariners. Gio Brusa (Pacific) contributed a three-run home run to the inning for his fifth home run of the season. He is now tied with two Orleans players for most in the Cape League this season.

Tommy Edman (Stanford) and Donnie Walton (Oklahoma State) both went 2-for-3 and walked twice. With two hits and two walks, Edman reached base for his 23rd straight game and that streak is the longest in the Cape League.

Edman said, ?I?m just going to stick with what I?ve been doing the past few weeks. I?ve just been trying to keep things simple. I know what my role is on the team and that is to get on base.?

Edman has continuously batted second in the lineup behind Cole Billingsley (South Alabama) since his arrival to the Cape despite batting leadoff in 33 games this past season at Stanford. When asked how he has had to adjust he said, ?I like batting two here because you get to see an at bat before you get to the plate? but I haven?t changed my approach at all.?

Y-D looks to extend their four-game winning streak to five games tomorrow against the struggling Falmouth Commodores (12-17) at 5 p.m. at Red Wilson Field.