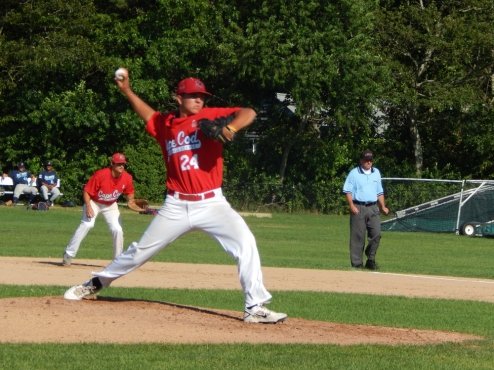 In what may have been his best performance on the Cape thus far, Kevin McAvoy tossed seven innings of one-run ball, allowing four hits and retiring seven by way of the ?K?. PHOTO: Katie Carlson/Y-D Red Sox

Pitching, defense, and an offensive explosion took place at Red Wilson Field from the Yarmouth-Dennis Red Sox as they went on to defeat the Brewster Whitecaps, 8-1.

The win improved the Sox to 19-21-2 on the season and dropped the Whitecaps to 14-27-1 on the summer. Brewster scored their only run in the top of the first inning off of YD starter Kevin McAvoy on an RBI single off the bat of Trevor Mitsui. McAvoy would settle down and throw six shutout frames following the top of the first. He finished with a line of seven innings, four hits, one run, and seven strikeouts to earn his second win of the year.

The Sox answered back with three runs of their own in the bottom of the first and never looked back after that. Jake Stinnett walked the first two YD batters he faced which came back to haunt him as they both came in to score in that inning.

The Sox added two more runs to their total with a two-run homer from Jose Trevino to take a 5-1 lead in the bottom of the third, and another homer in the fifth from Wayne Taylor to take a 6-1 lead.

With McAvoy cruising through seven innings, Austin Bosfield and Alex Blandino drove in two more Sox runs in the bottom of the sixth to take an 8-1 lead.

Two position players for the Sox would come on in relief for McAvoy in Jose Trevino and TJ White. Trevino and White shut down the Whitecaps as they held on to a 8-1 lead to win their second game in a row for only the third time this season.

The Sox are back in action tomorrow night at Red Wilson Field as they welcome in the Hyannis Harbor Hawks. First pitch is set for 4:30pm.