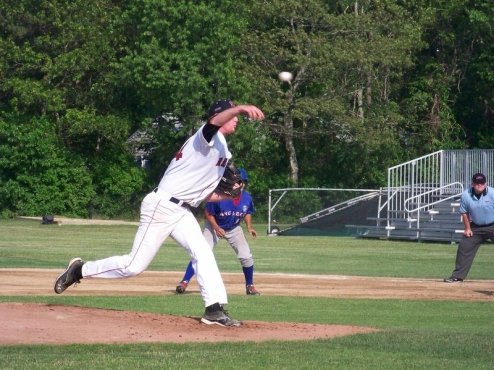 The Yarmouth-Dennis Red Sox came back from a two run deficit in the bottom of the ninth to tie the ball game off the bat of a DJ Stewart home run. Stewart?s bomb tied the ball game at 5-5 where the fans at Merrill ?Red? Wilson field were treated to free baseball.

The A?s pushed across four runs in the third inning to take an early 4-0 lead, but the Sox answered right back in the bottom half of the third and scored a run of their own.

More back and forth action would take place in the sixth when the A?s scored one to take a 5-1 lead, where the Sox answered again in the bottom half with two runs to cut Chatham?s lead to 5-3.

DJ Stewart kept up his torrid pace and went 2-5, increasing his hitting streak to six games. Stewart also hit a game-tying two run homer in the bottom of the ninth that allowed the Sox to adding a number to the loss column.

Chatham?s Dante Flores was 4-4 with three doubles and got on base five times. He also knocked in a run and scored a run as well.

Jeremy Null started for the Sox and struck out nine A?s hitters in 5.2 innings of work. Null allowed five runs off seven hits and walked two, earning him the no-decision.

Wayne Taylor got on base four times as he walked twice, was hit by a pitch, and hit a two-out triple in the 8th inning.r

Y-D?s home field doesn?t have lights on the field, and the game was stopped after 10 full innings in a 5-5 tie. Both teams picked up a point in the standings.

NOTE: As the game finished with a tie score, no pitching decisions were awarded.