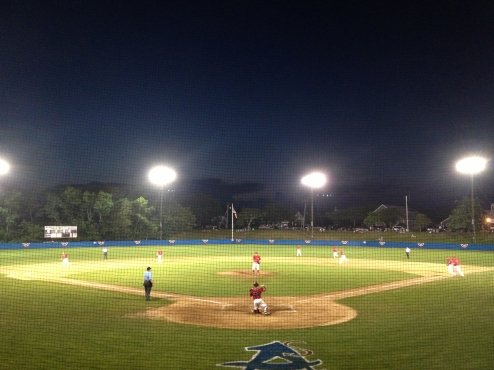 Note: A reporting error was brought to our attention on July 9th by a fan with regard to the assignment of a fielding error in the 9th inning of this game. We have made the correction and apologize for the mistake. -Ryan Gallant

The Yarmouth-Dennis Red Sox visited the Chatham Anglers in a makeup game at Veterans Field Monday night. The Sox looked to work off a win over Wareham and bring their home game win streak into their road play.

The game went through five scoreless innings with dominant pitching on the mound for both teams. In his first start for the Red Sox, James Kaprielian pitched five scoreless innings and allowed just three hits. The righty struck out seven of the 19 batters he faced giving him 11 strikeouts for the season in three appearances. Kaprielian has yet to let up a run since joining the Sox earlier this month.

The Anglers went with Tommy Lawrence (2-0) on the mound to start things off. Lawrence threw three scoreless and hitless innings for Chatham. He walked one batter which opened the game up and struck out two. He would leave the game after facing 10 batters.

This game was a pitching duel and a defensive showcase. The Red Sox accumulated 10 strikeouts and the Anglers six. The bats were not typical for Y-D as they only put up five hits compared to the Chatham?s eight.

Andrew Daniel continued to show his offensive abilities going one for three, scoring once and driving in a run. His batting average is .368 on the season, leaving him tied for third in batting averages in the league.

Despite Y-D putting two runs on the board in the sixth inning, Chatham struck right back with two of their own leaving the game tied until the ninth inning.

Jose Lopez (L, 0-2) would walk one batter before an error by T.J. White would allow there to be two runners on for Dante Flores with one out. Flores would double allowing the winning run to score, ending the game in a Y-D?s second walk-off road loss in a row. Flores went three for five with one RBI, two doubles and two strikeouts. Flores is leading the leading in batting average.

Dominic Moreno (W, 1-0) pitched a one hit top of the ninth giving him the victory.

The Red Sox return home Tuesday to take on the Brewster Whitecaps at 5 p.m. EST at Red Wilson Field. Be sure to check out Twitter and Facebook pages for live updates as well as the live broadcast with Cody and Chris starting with the pre-game show with Cody Normand and Chris Gilmore.