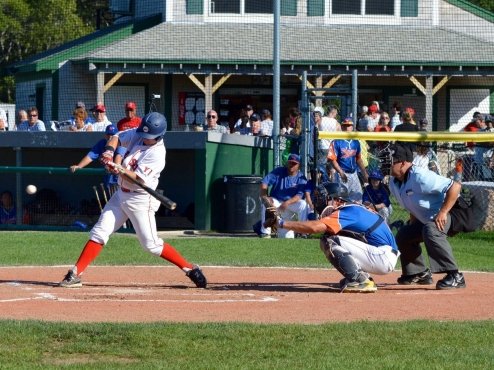 SOUTH YARMOUTH ? Game 2 of the Cape Cod Baseball League finals was nearly over before it even got started.

With a four-run first inning capped by a three-run home run by shortstop Donnie Walton, followed by a two-run shot in the second by Tommy Edman, the Yarmouth-Dennis Red Sox staked ace starter Ricky Thomas to a 6-0 lead and never looked back.

After being shut down 8-1 in Game 1 of the finals in Hyannis, the Red Sox bats needed to jump out early ? and they did. Nine of the team?s 18 hits came on either the first or second pitch of the at-bat. In total the offense hammered out nine runs en route to a 9-3 victory from Red Wilson Field Monday evening.

Game 3 of the Cape League Finals will be in Hyannis on Tuesday August 11.

That was plenty of run support for Thomas, who served as the team?s stopper all season long and sported an unblemished record of 7-0 with a miniscule 1.02 ERA. In his final start of the year, Thomas was all that and then some: going 7.2 innings while giving up two earned runs and striking out 10.

With the Sox leading 6-0 heading into the top of the fourth inning, the East champion Hyannis Harbor Hawks began mounting their comeback effort. Right fielder Austin Hays got it started by reaching base on an errant throw by Walton. The Hawks followed that up with a walk and a single to load the bases for third baseman Colby Bortles with no outs. Bortles laced a 2-2 pitch into shallow right field to cut the lead to 6-2. A sacrifice fly from catcher Jake Rogers cut the lead in half to 6-3.

But that?s all Thomas would allow as he sat down the next 14 of 15 batters ? seven by way of the K ? to cap off his outing and his season on Cape Cod.

The Sox offense responded in the bottom of the fourth with an RBI single from Dallas Carroll (4-for-4), who?s been a key cog in the offense since joining the team late in the season. They also tacked on two more runs in the fifth and eighth innings, just for good measure, with Josh Vidales scoring from third on an errant throw by Rogers and an RBI single by Walton (2-for-5, 4 RBIs, 1 HR).

It was a complete effort for the Red Sox lineup. In total, all nine starters recorded a hit with seven scoring runs and six recording multi-hit performances. Y-D?s heart of the lineup, Edman, Gio Brusa, Walton and Carroll, went a combined 10-for-17 with 7 RBIs and 6 runs scored. Their ?7-8-9 hitters, Michael Donadio, Vidales and Chris Hudgins ? a last-minute insert before game time ? went a combined 6-for-12 with an RBI and two runs scored.

Just how big was the do-or-die Game 2 of the Cape Cod Baseball League finals? One perfect view-seeking fan got to Red Wilson Field at 630 a.m. to stake his claim behind home plate before the rest of the 4,185 fans. He had to settle just to the right of it due to a line of chairs, covered with dew, that had already been reserved from the night before.

Tuesday?s game from McKeon Park in Hyannis should be equally anticipated as one team will storm the field in a raucous celebration while the other will be left to wonder what could have been.