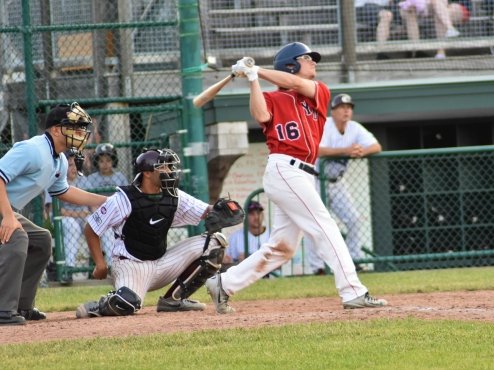 BREWSTER ? The Yarmouth-Dennis Red Sox never trailed on Tuesday night at Stony Brook Field but ended in a 4-4 tie against the Brewster Whitecaps after nine innings. With the tie, Y-D snapped a three-game losing streak to move their record to 2-4-2.

Y-D led 4-3 at the end of 8? innings but could not close the game out to secure what would have been the team?s first victory since Friday. Brewster shortstop Cameron Eden (Cal Berkeley) started the bottom of the ninth with a single off Tristan Baker (Western Carolina). Following Eden was Chris Wright (Bryant), who grounded into a fielder?s choice in front of catcher Joe Donovan (Michigan). Donovan singled with one away to move the tying run into scoring position for the Whitecaps.

Baker then induced a ground ball that was booted by second baseman Jimmy Govern (Eastern Illinois) to load the bases. The following hitter, Michael Massey (Illinois Champaign), hit a dribbler up the middle that Y-D shortstop Andrew Martinez (Cal Santa Barbara) knocked down, but couldn?t turn into an out. Baker got the next two hitters out to close out the tie.

The Y-D pitching staff, despite the game ending in a 4-4 tie, did a solid job of limiting hard contact all day. Brewster did not have any extra-base hits on the day and managed only one hit off of Red Sox starter Alec Marsh (Arizona State) which came off the bat of his collegiate teammate, Hunter Bishop (Arizona State).

?I felt good,? Marsh said after the game when asked how it felt to return to the mound as a starter. ?Even the other day, I felt good in relief. We had a day?s rest so I was excited to get back out there and start throwing again.?

Marsh faced just ten batters through four innings before faltering in the fifth.

?I just got tired a little bit,? he said. ?I had to get reminded that I?ve got to stay on my legs. I was flying open a little bit but that comes with not having started in a while. I haven?t gone the distance so I?m hoping the next one I go a little further but also being on a pitch limit and everything like that I?m just trying to give it all I?ve got for five innings.?

The Y-D bats decided to make an appearance after getting blanked in the second half of Sunday?s doubleheader. The Sox got on the board early courtesy of an RBI single from starting right fielder Quin Cotton (Grand Canyon) to score Zach Ashford (Fresno State), who reached on an error.

The Red Sox added a run in both the fourth and the fifth to make the score 3-0. Brewster closed the gap to one with two runs on two walks, two wild pitches, and a single in the bottom half.

Brewster then went on to tie the game up in the bottom of the seventh. Brandon Wulff (Stanford) started the inning by drawing a walk off of Braidyn Fink (Oklahoma). Wulff advanced to second on a wild pitch, third on a passed ball, and scored on a sacrifice fly off the bat of Cameron Eden.

Y-D charged back with a run in the top of the eighth. Jonny Deluca (Oregon) came home to score on a sacrifice fly by fellow Oregon Duck Gabe Matthews.

At the end of nine, the umpiring crew of Bob Delponte, Steve Durance, and Bob Gardner decided that there was not enough daylight to continue playing, and called the game in a 4-4 tie.

Quin Cotton?s diving catch in left field to end the eighth inning. The Whitecaps, down 4-3, had the bases loaded with two out in the bottom of the eighth inning, threatening to take the lead. Christian Molfetta (Stanford) hit a shallow fly ball to left that was snagged by a diving Cotton to preserve the Y-D lead.

The Red Sox are back in action Wednesday evening against the Falmouth Commodores. First pitch is scheduled for 6 p.m. at Fuller Field in Falmouth.