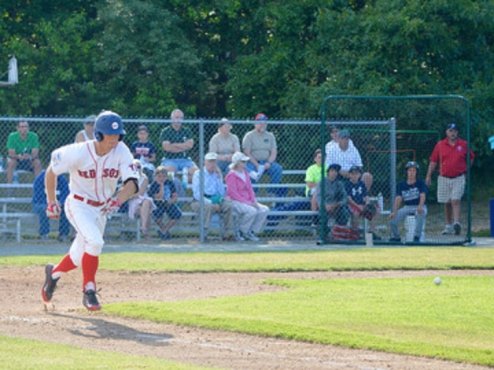 FALMOUTH ? The Yarmouth-Dennis Red Sox (4-8) snapped their four-game losing streak with a sweep of Monday?s doubleheader against the Falmouth Commodores (4-8) at Guv Fuller Field.

The Red Sox won game one of the doubleheader, by a score of 7-6, with a big seventh inning comeback. Down 6-3 going into the seventh inning, the Red Sox used three hits to battle back with Stephen Wrenn(Georgia) scoring the winning run.

The big seventh inning rally started with a leadoff walk drawn by Tommy Edman(Stanford) and was continued with hits by Donnie Walton(Oklahoma State), Mike Donadio(St. Johns), and Wrenn and a sacrifice fly from Connor Wong(Houston).

Christian Morris(Indiana) started on the mound for the Sox and gave up all six of the Commodores? runs in 5.1 innings. Ryley MacEachern(Stony Brook) pitched .2 innings and Dalton Lehnen(Cincinnati) pitched 1.0 inning of relief.

Christopher Viall(Stanford) was Y-D?s closer in game one of the doubleheader. He retired his first three batters of the seventh inning to give the Sox its first win in six days. Coach Scott Pickler said that Viall, a starter at Stanford, will most likely take on the closer role this season for the Sox.

The Red Sox pulled away early in the second win of the day, ultimately winning 5-1. The game was tied 1-1 going into the fifth inning but, after that, the Commodores were only able to put one man on base compared to the Red Sox?s eight.

Ricky Thomas(Fresno State) started his second game of the season and continued to impress his teammates. Thomas went 5.2 innings with seven strikeouts, allowing only five hits and one run. He gave the Sox their first win of the season on June 13th with six scoreless innings against Bourne.

Thomas leads pitchers with two wins and 13 strikeouts and leads starters with a .77 ERA. When asked how having Thomas on the mound changes the players? approach and confidence going into each inning, Wrenn said, ?We just have to have confidence that we can play small ball and play for one run because we know that the defense will be good.?

The Red Sox?s 12 runs scored on Monday in their two games against Falmouth were more than their number of runs scored in their last four games combined. Wrenn said, ?We just put it together in the end. We?ve been getting some hits and swinging the bats fairly well but we just weren?t piecing them together and getting timely hits. Today we had a little bit of that.?

Despite their recent struggles scoring, the Red Sox only stranded 13 men on base in their two games. The Sox stranded 15 in just one game last Tuesday in a loss to Orleans at Eldredge Park.

The Red Sox are now 4-0 in doubleheaders after sweeping both the Commodores and the Cotuit Kettleers. Yarmouth-Dennis will play the Bourne Braves at 5 p.m. tomorrow at Red Wilson Field.