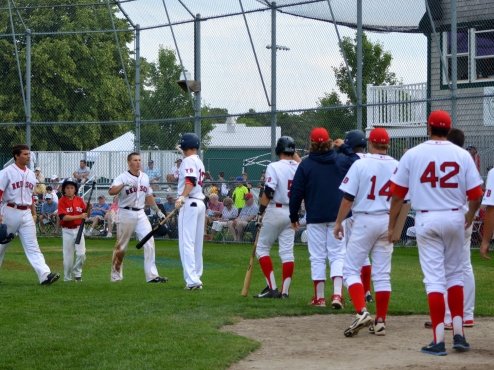 HYANNIS, Mass. ? With round one matchups complete, the Cape Cod Baseball League announced pairings and schedules for the Eastern and Western Division Finals series Sunday morning.

The Red Sox and Mariners will meet this summer for the fourth time in the post-season. Harwich beat Yarmouth-Dennis in 1987 to capture the Cape Cod Baseball League Championship and again in 2011 to advance to the League Championship.

Y-D defeated the Mariners in the 2010 Eastern Division Semifinals en route to a runner-up finish in the Cape League Championship.

Both teams split the six-game regular season series in 2014.

How They Got Here

The Red Sox advanced to the Division Finals with a 2-1 series win over the second-seeded Orleans Firebirds. Harwich swept fourth-seeded Brewster, 2-0, in the opening round.

About the Harwich Mariners

The Mariners captured the East Division regular season crown for the second time in four seasons, finishing with a record of 26-16-2.

Joe McCarthy (Virginia) has paced the Mariners offense thus far in the playoffs, boasting a .700 batting average in the first round. His average led all players in that category.

Highlighting the Harwich pitching efforts are James Mulry (Northeastern) and Jacob Evans (Oklahoma). Mulry, a native of West Roxbury, Mass., went 2-0 against Y-D in the regular season after earning wins on June 11 and August 1.

Evans has seen 29.1 innings out of the bullpen and has allowed the fewest earned runs (1) of all Harwich pitchers throwing more than four frames.

Manager Steve Englert has been with the Harwich Mariners for 16 seasons, the last 12 of which have been spent at the helm. In that timespan, he has led the Mariners to two Cape Cod Baseball League Championships (2008, 2011).

Picture Perfect Pitching For Y-D in Round One

Y-D surrendered only 3 combined runs in their two wins of its first-round series vs. the Orleans Firebirds.

Walker Buehler (Vanderbilt) stole the show in his team?s game two victory, throwing 7.1 innings of shutout baseball and allowing two hits. He was given a standing ovation after being relieved in the eighth inning.

Game three was marked by a similar performance from Kevin Duchene (Illinois). The southpaw allowed only one hit in his 7.1 inning appearance, sending down 12 by way of the ?K?.

Buehler was relieved by Drake Owenby (Tennessee) in game two, who shut down each of the five batters he faced to secure the win.

Despite receiving the loss in game one, Justin Jacome (UC Santa Barbara) took a shutout into the seventh inning, ultimately allowing two runs.

One run was all it took for Y-D in game three of its first-round series, as the Red Sox escaped with a 1-0 victory.

With runners at the corners, Josh Lester (Missouri) dropped down a squeeze bunt on the first pitch, scoring Jordan Tarsovich to give the Sox the series-clinching run.

Phil Bickford (Cal State Fullerton) received two post-season awards prior to game two of the Orleans series, being named a recipient of the McNeese Outstanding Pro Prospect Award as well as the Russ Ford Most Outstanding Relief Pitcher Award.

Bickford was drafted 10th overall by the Toronto Blue Jays in 2013, but opted to pursue baseball and education at Cal State Fullerton.

It Keeps You Running?

Following a .335 campaign at school, Andrew Stevenson has swiped 21 bases this summer, leading the Red Sox and the Cape Cod Baseball League.

The LSU Tiger has helped form the foundation of the Y-D outfield in 2014, appearing in all 44 regular season games, plus all three playoff contests and making only one error.

At the helm since 1997, Y-D manager Scott Pickler has led the Red Sox to 11 playoff appearances.

Around the Cape League

The winner of the Y-D vs. Harwich series will face either Cotuit or Falmouth in the Cape Cod Baseball League Championship.