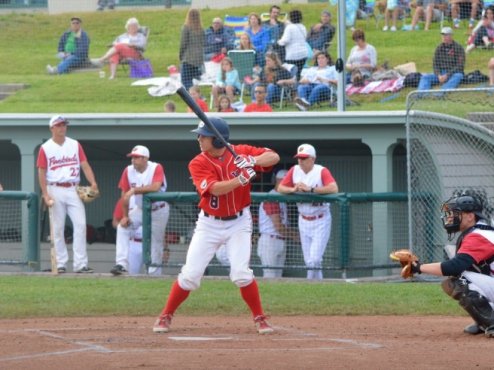 The Yarmouth-Dennis Red Sox (17-16) kept up with the league?s best team on Sunday night until a walk-off in the bottom of the ninth inning gave the Orleans? Firebirds (24-9) the victory.

This was the last matchup of the regular season between the East Division foes and it was a tough loss. The Red Sox came back from a 3-0 deficit to tie the game 4-4 in the seventh inning before ultimately losing 5-4.

Nathan Rodriguez (Arkansas) has struggled offensively recently but was the power in Y-D?s lineup on Sunday. He had two doubles, scored twice, and was 2-for-4 on the day.

The Red Sox had nine hits, one shy of the Firebirds, in the loss. Tommy Edman (Stanford) continued his recent success, going 2-for-4 with 2 RBIs. Cole Billingsley (South Alabama) extended his hitting streak to 15 games with a single. He also had one walk and one RBI.

Dalton Lehnen (Cincinnati) got his first start on the mound for the Red Sox. He had appeared in eight games, earned two wins, and averaged slightly more than one inning per appearance.

He lasted 2.1 innings and allowed five hits and three earned runs. Two of those hits were home runs by Bobby Dalbec (Arizona). He now leads the league with eight home runs. Coming into the game he was tied with teammate Kyle Lewis (Mercer) with six.

Evan Bell (Indiana), who hadn?t pitched since July 12th against Wareham, came in to pitch in the third inning. He struck out three batters and only allowed one hit in 3.2 innings of work.

Chad Hockins (Calif. St. Fullerton) took the loss in Sunday?s game despite a solid performance. He pitched two innings and struck out four of the first six batters he faced. In total he struck out five batters and allowed three hits and one run. That one run came in the decisive ninth inning.

Seven of the eleven Red Sox players to stand in the batter?s box recorded a strikeout. While Tanner Tully (Ohio State), Orleans? starting pitcher had a decent outing, the relievers late in the game were able to shut down the Sox lineup.

Carmen Benedetti (Michigan) and Kit Scheetz (Virginia Tech) combined for 2.2 innings of work. Benedetti allowed one hit and struck out three batters. Scheetz was able to put the Sox down in order in the ninth inning.

The Brewster Whitecaps (18-15) are the team in second place in the East Division and will play Y-D on Tuesday. The Red Sox will play the Whitecaps on Tuesday at 5 p.m. at Stony Brook Field.