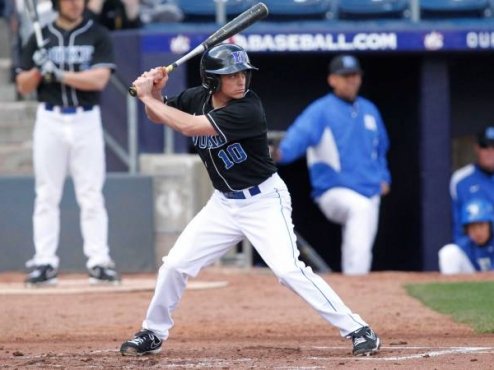 Angelo La Bruna went 0 for 2 at the plate Saturday night, but the returning Firebird reached on a hit-by-pitch and scored a crucial run in Orleans? 3-0 victory over the Red Sox. PHOTO: Duke Photography

Looking for another road victory, the Yarmouth-Dennis Red Sox visited the Orleans Firebirds at Eldredge Park. While bats were still somewhat alive, this game was truly representative of what early Cape League ball typically is; a pitching battle.

The Sox would lose the game 3-0 giving them a 2-2 record and leaving them with 4 points in the Eastern Division. The Firebirds improved to 1-1 on the season in their home opener.

In the top of the first inning, Matt Honchel (Miami University) led off again for the Sox and reached on an error. Honchel would then move to second after a passed ball. With one out in the inning, Robert Pehl (University of Washington) would ground out allowing Honchel to move to third. Andrew Daniel who stood out in Y-D?s win over Brewster Friday night, would strike out to end the inning, leaving Honchel on base.

The Firebirds started the lefty Bobby Poyner (Univesity of Florida) on the mound, while the Sox put Kevin McAvoy (L, 0-1) of Bryant University on the mound. McAvoy would walk his first batter who would later be caught stealing second base. McAvoy finished the inning out strong with a strikeout and fly out to right.

In the top of the second, Taylor Smart (University of Tennessee) would single to left and steal second base. He would advance to third after taking second thanks to an error from Firebird catcher Collin Slaybaugh (Washington State University). Unfortunately for the Sox, Smart would be left on base after a strikeout and a ground out ended the inning.

McAvoy would record two more strikeouts in the bottom of the second inning. He struck out Zach Fish (Oklahoma State University) and Riley Moore (University of Arizona). The top of the third proved to be eventful for the Sox. The Firebirds put Lucas Long (W, 1-0) of the University of San Diego on the mound. Cole Peragine (SUNY Stony Brook) walked to lead off the inning. Then, on a passed ball he would move to second. Honchel would then be walked. Auston Bousfield (University of Mississippi) would strike out bringing Pehl to the plate. The designated hitter would single to left. Peragine would round third base and head home where he would be thrown out. The inning would end after another strikeout from Daniel.

McAvoy was put under pressure in the bottom of the third. Firebirds third baseman, Jordan Betts (Duke University) would send a ground ball to shortstop and Peragine, who fielded it and made the throw to first on the run in a spectacular play. McAvoy would load the bases but struck out Jordan Luplow (Fresno State University) to settle himself back in the inning. Austin Davidson (Pepperdine University) would hit a bases clearing double to put the Firebirds up 3-0 at the end of the third.

Sox bats were quiet in the top of the fourth. McAvoy returned to the mound in the bottom of the fourth and showed his ability to pitch when down. He allowed just one hit and struck out another Firebird batter.

The Firebirds utilized their pitchers in this game. In the top of the fifth they put in Trent Swart (Duke University) on the mound. Peragine would single giving the Sox their only hit of the inning. McAvoy pitched two thirds of the inning, recording his seventh strikeout of the night and allowing 3 earned runs and 7 hits. Nick Kozlowski (Hofstra University) would replace McAvoy and finish out the inning.

The Sox would once again get a runner on third base in the top of the sixth inning after two singles. The Sox failed to bring a run in. Kozlowski stood out in the remainder of the game. He walked one batter and struck out four and did not allow the Firebirds to reach base after his walk in the bottom of the sixth. Sox catcher, Elvin Soto (University of Pittsburgh) showed off his arm after he gunned down Chris Marconcini (Duke University) trying to steal second.

The Firebirds made three more pitching changes before the end of the game. Each of those three pitchers pitched one full inning and recorded three strikeouts. In total, 26 strikeouts were accumulated between the two teams.

While the Sox recorded just as many hits as the Firebirds, the hits unfortunately came when either no runners were on base or were not in scoring position. The Sox look to turn things around Sunday as they return home to Red Wilson Field at 5 p.m. to face the Chatham Anglers. Check out Twitter and Facebook pages for updates as well as our own live broadcast of the game.