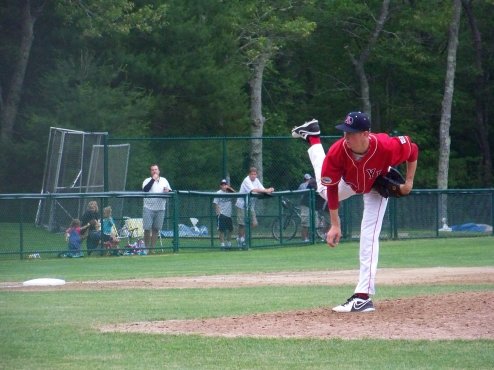 Coming off a loss shortened by lack of daylight, the Sox set out to turn things around and move up in the Eastern Division of Cape Cod Baseball. Unfortunately for Y-D, Cotuit continued their four game winning streak with an 8-3 win.

The Sox started Erick Fedde (1-0) on the mound. The Nevada-native went 6.0 innings allowing four hits, one run and striking out five. Fedde pitched an impressive game, not allowing a hit until the bottom of the fifth inning. However, he would get no decision in this game.

The two teams played four and a half scoreless innings until a single to left allowed a Kettleer to score. With two runners on Fedde quickly got out of the inning after the run. Both teams showed off defensive skills despite Cotuit ending the game with three errors and the Sox with two.

The Sox displayed their aggressiveness on the base path early on with both T.J. White and Jeffery Keller stealing bases in the first and second innings respectively.

The Sox struck back in the top of the seventh with two runs thanks to an error on the throw from right field. Bradley Strong singled to right field moving Auston Bousfield, who was walked, to third. Kettleer right fielder, Bradley Zimmer, threw the ball past his third baseman allowing Bousfield to round third and score.? Strong advanced to second on the play. A ground out from Taylor Gushue would then move Strong to third for when Cole Peragine singled up the middle driving in another run and giving the Sox the 2-1 lead going into the bottom of the seventh.

Kyle Wood (L, 0-1) came in to replace Fedde for the Kettleers next at bat. He started off strong for the Sox, striking off the leadoff batter in the inning. He then hit Elliot Caldwell with a pitch putting him on first. Kevin Bradley doubled, putting two runners in scoring position. Zimmer singled to right allowing both runs to score.

Following this, Wood walked Hunter Cole putting runners on first and second. Rhett Wiseman then hit into a fielder?s choice advancing Zimmer to third. Mike Ford came to the plate for the Kettleers and singled and advanced to second putting a runner on third and scoring two more runs.

The Kettleers did not let off Wood in the inning. They added three more runs before the end of the inning and were now up 8-2 after their seven run spree. The Sox scored one more run in the top of the eighth to make the score 8-3 where it would remain until the final out in the ninth. Dusty Isaacs got the win, and his first, for the Kettleers.

Unfortunately for the Sox, their batters could not string together enough hits to keep the game close. Y-D looks to turn their play around tomorrow when they return home to face the Falmouth Commodores at 5 p.m. ET. Check our Twitter and Facebook pages for updates as well as our own live broadcast of the game.