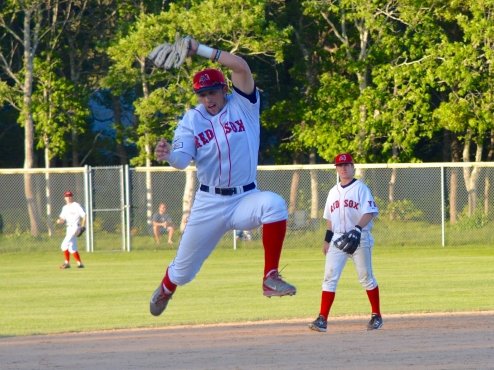 SOUTH YARMOUTH ? The Yarmouth-Dennis Red Sox(0-2) couldn?t put together a late game rally against the Harwich Mariners(1-1) on Wednesday as they fell 4-2 in their season home opener at Red Wilson Field.

The Red Sox fell behind early and were never able to come back. Alec Eisenberg, a senior at Hofstra University, pitched five innings in his first start for the Sox. He struggled early, allowing the Mariners to score 2 runs in the first inning, but gave a strong performance. All four runs on the day are credited to Eisenberg after a shaky sixth inning start that gave reliever Evan Bell a bases loaded situation. He racked up 92 pitches in five innings and finished with 5 strikeouts and 4 walks.

Third baseman Brady Conlan continued to show his composure and confidence in the infield. Conlan was credited with 8 outs on the day, 5 of which were plays to Ryan Noda at first base. An outfielder at the University of Cincinnati, Noda has also started off the season well defensively. Conlan and Noda have proven to be reliable staples in the Red Sox infield despite early trouble.

Despite Conlan and Noda?s successes, the Y-D Red Sox continued their defensive struggles from last night?s game against Chatham, specifically at the shortstop and second base positions. After Connor Wong?s three-error game yesterday, he started at second base while Donnie Walton made his first start of the season at shortstop. Wong and Walton both had an error a piece in the Sox?s second loss of the season, Walton?s allowing Harwich?s second run to score in the first inning.

With two doubles and one home run, the Sox were hitting the ball harder than they did in their season opener. Stephen Wrenn led off and put the Sox on the board in the third inning with a solo home run. Wrenn also knocked in the second run in the seventh inning when the Sox were finally able to capitalize on a Harwich error from third baseman Connor Justus. Despite the strong bats, the Y-D players were not able to find holes in the field and put runs on the board.

Geoff Bramblett, a junior at University of Alabama, got the start and the win for the Harwich Mariners. He only allowed 1 run in 6 innings and had 6 strikeouts. Johnny Adams led the Harwich Mariners going 2-4 with 2 RBIs while the team together only totaled 5 hits. Despite the limited offense, the Red Sox could not make anything happen against starter Bramblett and the Mariners? tight defense.

The Yarmouth-Dennis Red Sox will play tomorrow looking for their first win of the season in Orleans against the Firebirds(1-1). After winning the 2014 Cape Cod Baseball League Championship, there is plenty of time to turn their season around.