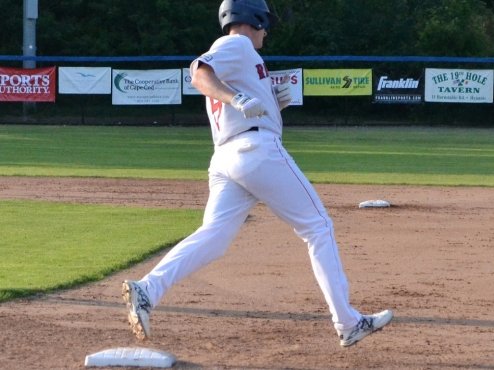 The Yarmouth-Dennis Red Sox (9-11) dropped their second straight game on Friday night against the Hyannis Harbor Hawks (13-8) 6-2 at McKeon Field.

The Red Sox and Harbor Hawks both totaled eight hits each but YD left 11 men on base compared to Hyannis? five. Cole Billingsley (South Alabama) went 3-for-5 on the day with one RBI. Hyannis? Blake Tiberi (Louisville) went 2-for-4 with 4 RBIs and a double.

Five other players contributed hits for the Sox, including Gio Brusa (Pacific) who hit a home run over the right field fence. It was his first of the season and he said, ?It felt good. It felt like what it should feel like.?

Brusa has struggled offensively so far this season, striking out in 15 of his 31 at bats coming into Friday. When asked how he is adjusting he said, ?It?s just mental. (I need to) be in attack mode and not get discouraged.

Tommy Edman (Stanford) continued his offensive success, reaching base for the 16th straight game. That streak is currently the longest streak in the Cape Cod Baseball League and the longest so far this season.

Brandon Bailey (Gonzaga) started his third game of the season on the mound for the Sox after going 0-2 in his first two starts. He went 6.1 innings, allowed only five hits, and struck out six batters. The Harbor Hawks scored five runs on Bailey but only two of them were earned.

Bailey said, ?It always feels good when you can give your team a good chance to win. My goal every time I get the ball?? to try and pitch a quality outing, go at least seven, and give up three or less runs. I was able to do that today.?

The Harbor Hawks? first two batters came around to score for the first two runs of the game but, after that, Bailey was able to retire 11 straight batters.

Bailey said, ?Anytime you start off not the way you want to you have to dig down deep and try to focus up. That?s what I tried to do. That?s baseball? I?ve just got to keep pitching one pitch at a time.?

The Red Sox will celebrate Independence Day by playing the Harbor Hawks again tomorrow at 5 p.m. at Red Wilson Field.