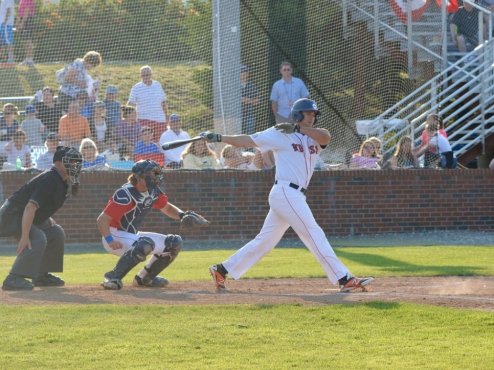 Evan Bell (Indiana) got his first start of the season for the Red Sox after appearing in 10 games in relief. He had never pitched more than 3.2 innings in a single outing but pitched four plus innings on Sunday. He struck out four batters, allowed six hits, and gave up two runs.

Cory Malcom (Arkansas Little Rock) replaced Bell in the fifth inning and, once the runners Bell were responsible for scored, the Red Sox faced a deficit of 2-1.

When asked whether it is frustrating to see your team fall behind when he had put them in a good opportunity to win, he said, ?It?s always disappointing when you?re behind but you?ve got to control what you can control and that?s just throwing good pitches. They hit some pretty good pitches tonight so that was a little frustrating.?

Malcom only pitched 1.2 innings but allowed three runs. Before Sunday night?s game, he had not allowed an earned run in 10.2 innings through five appearances.

The Red Sox lineup only produced seven hits, which was not enough to combat Hyannis? 12. Y-D batters also struck out nine times on the day, including two each from All-Stars Cole Billingsley (South Alabama) and Donnie Walton (Oklahoma State).

Josh Vidales (Houston) was the only spark in the Red Sox lineup, going 2-for-3. With Will Toffey (Vanderbilt) out for the season, Vidales has seen a lot more playing time. He said, ?The more reps you get, the more at bats you get, the more pitches you see, you kind of settle in the box a little bit. It makes it a lot easier.?

Kukowski struck out one batter in a quick 1-2-3 inning. He said, ?I?m really excited. I only found out a week ago that I was going to be able to come up and play. I?m just going to try and pound the zone, throw strikes, and compete.?

The Harwich Mariners? (17-20-1) victory over the Chatham Anglers (21-17) brings the Mariners one step closer the Y-D in fourth place. The Red Sox look to make moves in the East in the last week of the season and will play the Bourne Braves (18-18-2) on Tuesday at Red Wilson Field.