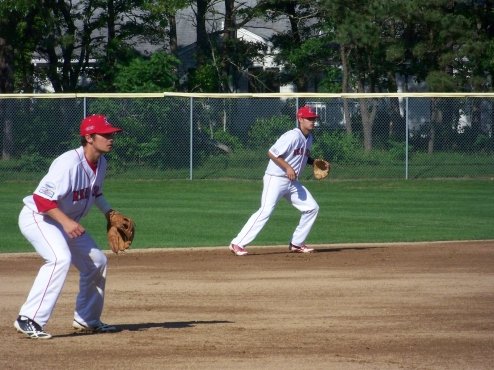 The Yarmouth-Dennis Red Sox put a halt on their three-game losing streak as they defeated the Falmouth Commodores 8-4 on Wednesday night. Nick Kozlowski (Hofstra) picked up the win for the Sox as Wayne Taylor accounted for four of the Red Sox twelve hits, with one RBI and two runs scored.

Jose Lopez started for YD and went four innings, allowed three runs (zero earned) on three hits, struck out three and walked one. Lopez pitched very well and was in line to go deep into the game had it not been for four errors on the Sox defense that shot his pitch count up.

Falmouth struck first in the top of the second inning on a two run single from Max Murphy. Kevin Crone and Connor Hale scored on the play and gave the Commodores an early 2-0 lead. Falmouth would gather another run in the fourth to extend their lead to 3-0. After that, the Sox pitching shut down the Commodores and allowed just two hits from the fifth inning on.

As the Falmouth offense struggled, the YD offense exploded for three runs in the fifth, and four runs in the sixth to take a 7-3 lead. Jeremy Null (Western Carolina) came on in the ninth and threw a perfect 1-2-3 inning to the 3,4,5 hole hitters and locked up the 8-4 victory for the Sox.

YD has a day off tomorrow and will be back in action on Friday night as they host the Orleans Firebirds. First pitch is set for 5pm with the pre-game show at 4:35 on Teamline.