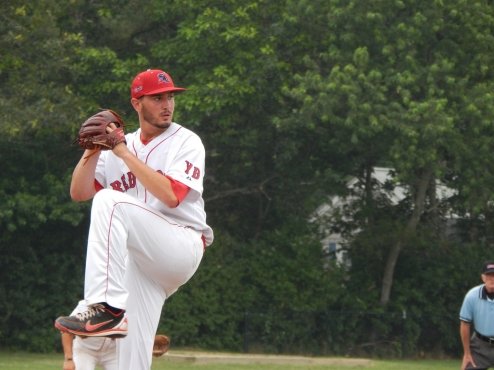 Dan Savas had twelve strikeouts in eight stellar innings pitched for the Y-D Red Sox Thursday, earning the win for both himself and his team. PHOTO: Katie Carlson/Y-D File

In a game that was dominated by the pitchers, for both sides, the Sox were able to scrounge around a few more hits when they needed them to pick up a big 5-3 win over the 2nd Place Harwich Mariners on Thursday night at Red Wilson Field.

Dan Savas (Illinois State) took the hill for the Sox for his third start of the season looking to get the Sox back in the win column.? And did he ever give the Sox the chance to pick up a win.? The first pitch of the game was a fastball by Savas, and Ian Happ took it yard, way over the centerfield fence, high into the trees, to give the Mariners an early 1-0 lead.? But after that pitch Savas was lights out. Struck out the side following the home-run in the first, en route to 12 strikeouts on the afternoon. Savas didn?t look back after giving up that first pitch home-run, he went 8 innings, giving up only 4 hits, and that one run.? A brilliant performance out of the tall righty.

The Sox hitting was no where to be found through the first four innings.? Starting pitcher for the Mariners, Jalen Beeks, was perfect through the first four and a third.? Then gave up a bloop single to Jose Trevino.? The So hitting came alive in the 6th when they were able to get their first run of the ballgame to tie it all up at one.? Auston Bousfield led off the inning with a single, followed by a double by Cole Peragine, a fly out by TJ White, and then a saftey squeeze but on by Coach Scott Pickler with Taylor Smart at the plate.

A one to one ball game heading into the bottom of the 8th inning and it all began to unravel for the Mariners. Beeks was out of the game, Mason McCullough in the ballgame on the hill, and the Sox sent 7, 8 and 9 to the plate.? After Brandon Downes flew out to begin the inning, Bousfield reached on an error by the left fielder, then a walk to Peragine put runners on first and third and possible inning ending double play in order.? McCullough got the ground ball, but Branden Cogswell, at short, booted the routine double play ball and allowed Bousfield to come around and score the go ahead run.? DJ Stewart would pinch hit and triple home 2 more runs for the Sox before scoring himself on a Alex Blandino single.? The Sox took a 5-1 lead into the 9th inning and Darrell Hunter on to close out the ball game.

Hunter was able to retire the first to hitters of the inning for Harwich but this is when the rally came alive.? A few weakly hit balls found holes in the infield, bringing home two Mariners to bring the game to 5-3 and thats where Hunter shut the door giving the Sox the win and bringing them only 3 points out of second place in the East Division.