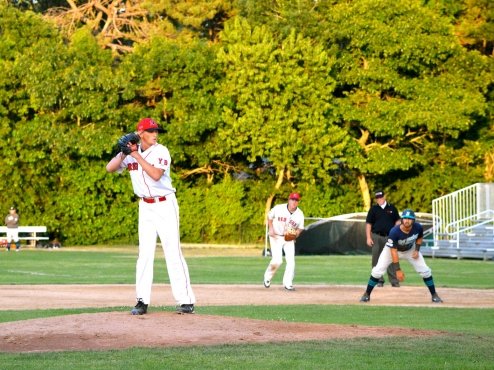 Phil Bickford threw 2.2 innings for the Yarmouth-Dennis Red Sox Sunday evening, earning the save in a 3-2 win for Y-D. Photo: Kyra McDonald/Y-D File

BREWSTER, Mass. ? Gio Brusa had three hits and the Brewster Whitecaps won the battle in that category, but the visitors came away on the big board as the Yarmouth-Dennis Red Sox outlasted the ?Caps 3-2 at Stony Brook Field Sunday evening.

Justin Jacome got the starting nod for Y-D, throwing five-plus innings of two-run ball on eight hits and one walk, while sending down six by way of the ?K?. The lefty from UC Santa Barbara was solid out of the gate, striking out the side in the first inning and allowing only four hits through four innings. He was able to keep the Whitecaps at bay until the bottom of the fifth inning, when LeMonte Wade singled to score Georgie Salem, tying the score at one.

Despite this, the Red Sox won the race to the run column, doing so in the top of the fourth when Jordan Tarsovich singled to right, bringing in Andrew Stevenson. Stevenson had previously opened the inning with Y-D?s first hit in the game, an opposite-field single.

Y-D?s scoring was finished in the sixth inning in a frame that saw six men come to bat. Stevenson and Donnie Walton reached on a walk and single, respectively, before Tarsovich laid down a sac bunt, moving the runners into scoring position. Hunter Cole was next to the dish, sending a sac fly to center field and scoring Stevenson. Rob Fonseca then drove in the game-winning run with a double to plate Walton and give the Red Sox a 3-1 lead at the time.

Brewster?s only other offensive production came in the bottom of the sixth, when Brusa led off the inning sending a 1-1 pitch to left center for a home run, narrowing the deficit to 3-2.

Billy Strode made his third appearance out of the bullpen for Y-D, tossing 1.1 hitless innings and striking out one.

Coming out of the Whitecaps bullpen was Andrew Naderer, who replaced starter Garrett Mundell in the sixth and remained on the bump for the balance of the game. He allowed a single hit and struck out three, keeping the Y-D bats from doing further damage.

Phil Bickford was the story of both teams? pitching, however, throwing 2.2 innings, striking out four, and earning the save. Between his performance and that of Strode, the Red Sox bullpen faced two batters over the minimum in four innings pitched.