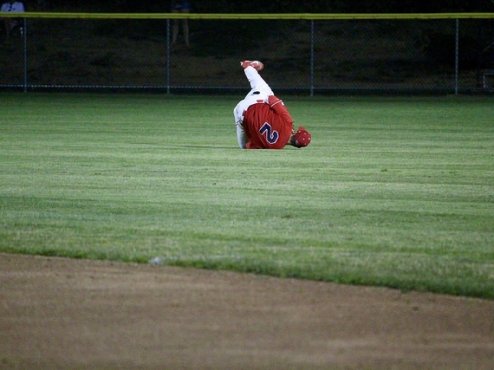 The crowd at Whitehouse field erupted as Josh Smith hit a ball high and approaching the wall in center field. ?Center fielder Kyle Isbel turned hi back and sprinted toward the fence as the Red Sox faithful held its breath. He reached out in front and fell to his knees as the ball dropped in. For a moment, silence deafened the field. Isbel came up with the ball and teammates pumped their fists. While he made it look easy, his surprise almost matched his teammates.

“I just took my head off it and got to it as quick as possible,? Isbel said. ?Just sprint to the spot and hope it?s there when I look up.?

The defense played a vital role in maintaining the game in the Red Sox second straight extra-innings win. Kyle Isbel?s plays lit up the crowd, but the rest of the defense held its own, making tough plays and preventing the Mariners from scoring any more runs.

“We all play as one,? Isbel said. ?We talk a lot, we have good communications. We just play our hearts out and hope for the best.?

Isbel continued to show off his defensive skill when Smith stepped to the plate with two outs in the eighth inning. The Harwich shortstop looped a ball into center that looked to be dropping before Isbel slid in and robbed him of yet another hit.

Smith, who is first amongst Harwich hitters with a .390 batting average, was just two Isbel-missteps from having a 4-5 night at the plate. Connor Kaiser loves what he sees from his center fielder.

?He?s a great athlete,? Kaiser said. ?He gets great jumps on balls and uses his athleticism to make some awesome plays.?

Kaiser made a few plays of his own in the game. In the tenth inning of the game, with a man on first, Harwich?s Andrew Moritz rocketed a ball up the middle of the field. ?Kaiser shuffled over, reached out his glove and made the grab, flipping the ball to Nico Hoerner at second to get the lead runner.

While Hoerner couldn?t record the double play, Kaiser?s heroics could have saved a run and the game.

“That?s just a part of my job for the team,? Kaiser said. ?I?m just trying to stay ready each pitch and make a good jump on the ball if it comes my way. Everything else will take care of itself.?

Kaiser ended up being one of the teams heroes as he hit a double in the eleventh that moved Luke Miller to third and put him in a position to score the game winning run for the Red Sox in extra innings.

The team made solid plays up the middle all game long. Isbel calls the combination of Kaiser and Hoerner, ?one of the best duos? that he?s ever played with.

The defense also showed its power on the basepaths on Tuesday. In the third inning, starting catcher Mike Cassala gunned down Antione Duplantis for the final out and, with Duplantis up in the tenth, Cody Martin joined the movement to catch another runner on the bases. ?Y-D was never a team that excelled in that area, but the tandem of Cassala, Martin and Darren Trainor has provided a spark.

In addition to the work behind the plate, Brendan Nail ended the game picking off Cobie Vance at first. Vance gave himself up and stood still in disappointment as the Red Sox defense once again got his number.

“In a close game like that you expect them to make plays,? Manager Scott Pickler said. ?That?s what they did, it was clutch.?

Following two straight games in which the game went to extra innings, Y-D is excited to get back out onto the field.

Despite the long nights in each of past two games, the team is anything but tired.

“No, we hope it keeps going,? Kaiser Said. ?This game is too much fun.?