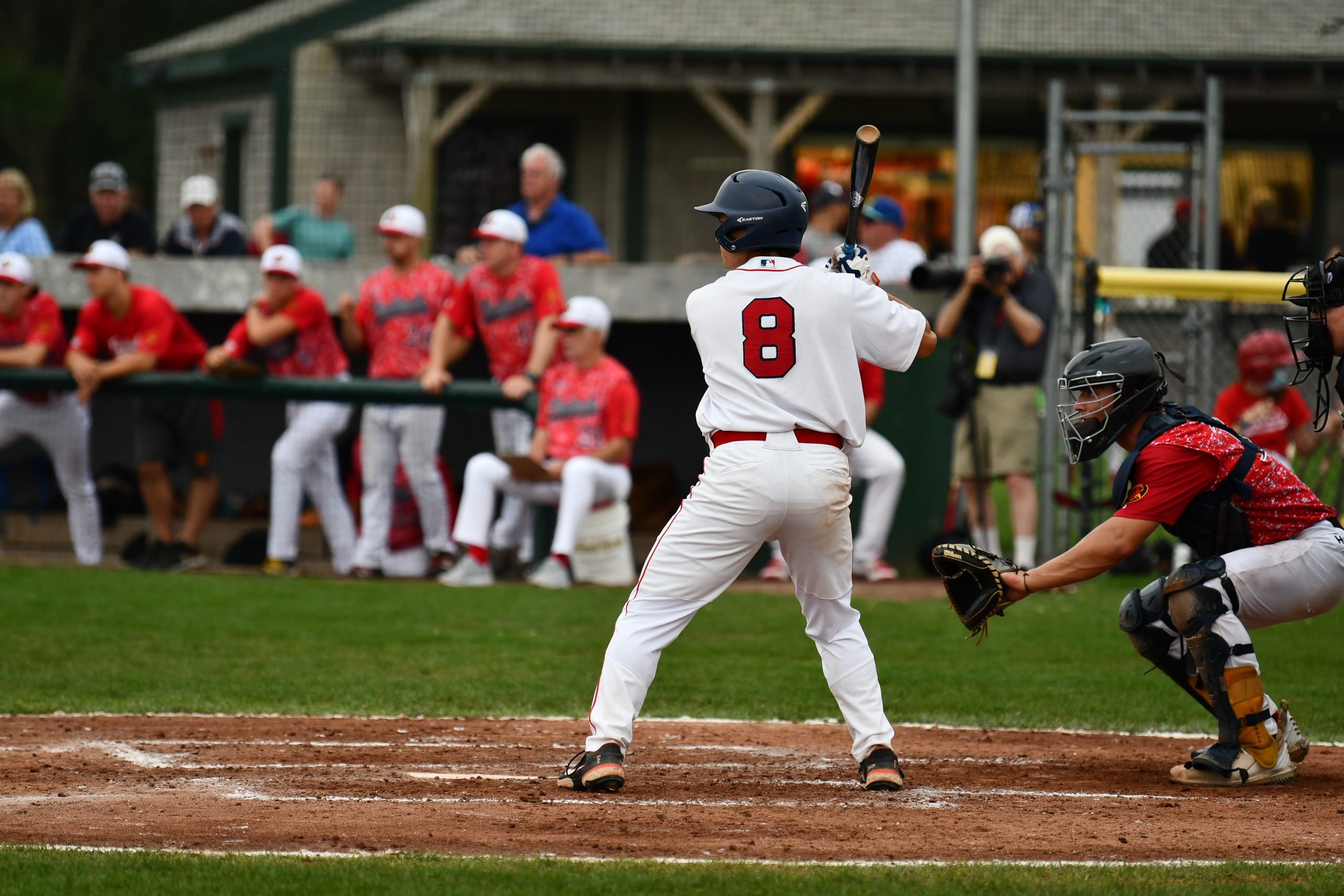 YARMOUTH — After their fifth tie of the season on Saturday night, the Red Sox came back home for a second consecutive game against the Orleans Firebirds. The Sox found themselves in a hole early on and could not crawl out of it until a seventh inning spark lit a fire under the Y-D offense, as they went on to score six runs, take the lead, and get the win.

Entering the bottom of the seventh inning the Sox were down 9-5 with heavy clouds rolling in and darkness slowly becoming a factor.

Wyatt Hoffman started the inning off by reaching first base on an infield error. A base-hit by Tanner Smith followed to put two on for Kody Huff. The runners both advanced into scoring position due to a wild pitch, and Huff chopped a ground ball up the middle that could not be handled by the Orleans shortstop.

Hoffman was plated and Smith made it to third, but later scored on yet another wild pitch making it a 9-7 ballgame.

Dominic Keegan continued the rally with a single into right field. Peyton Graham was then drilled by the first pitch of his plate appearance, which loaded the bases for Chase Luttrell. Luttrell delivered in a big way with a ground ball into right field to bring home two runners and tie the game at 9 apiece.

After a strikeout that counted as the first out of the inning, Pascanel Ferreras stepped up to the plate, pinch hitting for Drew Bowser. Ferreras was able to work a walk and load the bases once again, this time for Zach Lew.

With the infield in, Lew hit a ground ball up the middle that got by the middle infielders for a two run single that would put Y-D ahead for the first time in the game.

Lew had a gameplan stepping up to the plate, and executed it to perfection. He was smiling from ear to ear with his teammates after the game.

“I mean, I just wanted to put the ball in play. There was one out, bases loaded, infield was in, and I was trying to hit the ball in the middle of the field and it worked out,” Lew said.

This would wind up as the game winning hit, and once the inning ended the game was called for darkness giving a final score of 11-9 through seven innings.

Other Y-D notables from today include Kody Huff, who smacked a double into left field in the fourth, and Dominic Keegan, who roped his first homerun over the fence this season for two runs and keeping Y-D in the game.

Crew Robinson also put together an important at-bat with his two run double into left-center field in the sixth inning.

As a team, the Red Sox accumulated 12 hits, which would double up their opponents in Sunday night’s game.

Despite being just seven innings long, this was one of the more exciting games all season for Y-D, and coach Scott Pickler agreed.

“I thought we hit the ball really well. The first guy was tough on us and then we took advantage of what they gave us and had a lot of really quality at bats right there out of a lot of people. We have some depth on our bench, and I think it was a big win for us. Relievers kept us in it a little bit, and I thought it was outstanding. We needed something like this,” Pickler said.

The Red Sox were coming off of a few losses this week, and Saturday night’s tie put a bitter taste in their mouth. Sunday night’s game is exactly what they were hoping for, and they look to continue this momentum as they continue to face off against East Division opponents.

Tomorrow night the Red Sox stay in Yarmouth for a home game against the Harwich Mariners at 5:00 pm. The two teams are neck and neck in the division standings right now, and this may prove to be one of the most important games of the season.