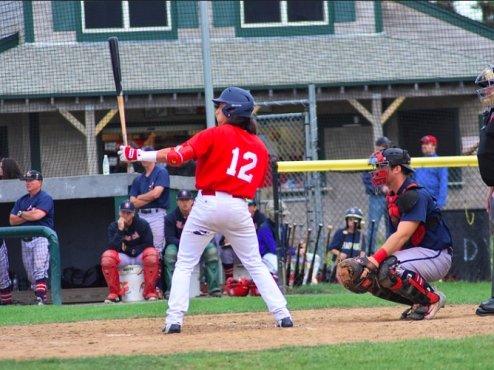 SOUTH YARMOUTH ? The Yarmouth-Dennis Red Sox dominated Orleans in all facets of the game Tuesday night, defeating the Firebirds in resounding fashion by a score of 10-4.

The Y-D offense struck early, plating a first-inning run for the fourth time in 14 games to open the scoring. While the three previous occurrences saw the Red Sox score just a single run in the first, Tuesday was a different story. Y-D batted around in the inning, pushing across six runs off Orleans starter Levi Stoudt (Lehigh), who lasted just a single inning.

Quintana?s gotten off to a slow start this season, but Red Sox manager Scott Pickler has been working with him on swing adjustments during pregame batting practice. After a three-hit performance Tuesday, it?s safe to say the adjustments seem to be paying off.

?At first, it was a little weird and difficult because I wasn?t really used to it,? said Quintana after the game. ?Today was definitely the most comfortable I?ve felt, not just because I went 3-4, but I was just more relaxed in the box than I have been recently.

?I?d be lying if I said I didn?t get a little discouraged, but I don?t beat myself up,? Quintana said of his slow start. ?It?s baseball. This is a game of failure, so the last thing I want to do is put more pressure on myself.?

Andrew Daschbach (Stanford) continued his torrid start to the season, smacking a two-run home run in the second inning. The first baseman from Stanford has arguably been Y-D?s best hitter, as he leads the team in batting average (.364) and home runs (2).

Alec Marsh (Arizona State) made his second start of the season and was brilliant yet again, striking out eight in his four innings of work. While the Firebirds did score three on Marsh, they were all unearned runs due to an error by Christian Koss (UC Irvine). The Milwaukee native now trails Harwich right-hander Garrett Stallings by a single strikeout for the league lead.

Trenton Denholm (UC Irvine), Chandler Fidel (Arkansas Little Rock), and Ryne Nelson (Oregon) combined for an additional 11 strikeouts and just a single hit allowed in their five innings of relief. Denholm came on in relief of Marsh, throwing three innings and striking out five Firebirds. Fidel and Nelson each threw a single inning each and struck out the side to increase the Y-D strikeout total to 19 for the game, the most in any CCBL game since 2013.

Nelson entered the game in the ninth inning and struck out the side on just 12 pitches. He was practically untouchable and all three strikeouts were swinging. A two-way player at Oregon, Nelson?s future on the mound looks bright.

The Red Sox (7-5-2) head to Harwich tomorrow to take on the first-place Mariners (8-6-1). A win would vault Y-D into first place in the division at the quarter mark of the season. First pitch is scheduled for 6:30 p.m at Whitehouse Field.