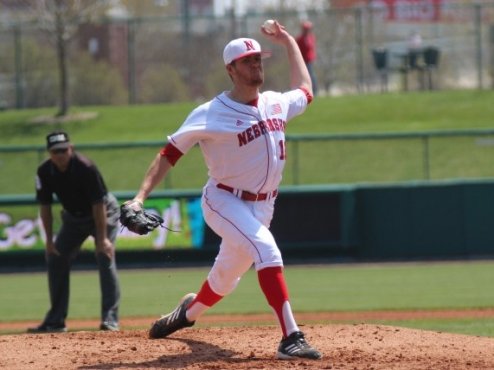 The Yarmouth-Dennis Red Sox hit the road for the first time this season as they headed to Harwich to take on the Mariners.? Coming off of an opening day win on Wednesday at Red Wilson Field over the Bourne Braves, the Sox were poised to continue the winning ways in Harwich.

The Harwich Y-D game was the only game going on on the Cape today after all other games were canceled due to the forecasted rain.

Seton Hall pitcher, Jose Lopez, took the mound for the Sox in game 2 of the season and got off to a rocky start.? Lopez opened up the game getting ahead of Mariner lead-off man, Ian Happ, 0-2.? Happ reached on an infield single and didn?t stay on first very long, quickly stealing second base and getting into scoring position. The next Harwich batter sacrificed him over to third and then Mark Zagunis, Virginia Tech Sophomore, lined a single to right to take the early 1-0 lead over the Sox. After Lopez retired the clean-up man with a strike-out, Texas Longhorn C.J. Hinojosa mirrored what Zagunis did earlier, and lined a single to right, bringing in Zagunis from second base to take a 2-0 lead after one full inning.

The Sox weren?t able to string hits together throughout this game, making it hard to move runners into scoring position.? In the bottom of the third, the Mariners struck again in a similar fashion.? Lopez issued a lead-off walk to Aaron Barbosa (Northeastern University) who then stole second and was driven in by a one-out RBI double by Ryan Lindemuth (William and Mary).? That increased the Harwich lead over the Sox to 3-0.

The Sox were able to put a lot of balls in play, they just happened to be right where the Mariner defense was.? Y-D just couldn?t find many holes in the defense all night.

The bottom of the 6th rolled around and once again the Harwich lead-off man reached base; this time from a Zagunis double to right field.? He would then come in after Hinojosa hit a little dribbler back to relief pitcher, Kyle Wood (Purdue), who overthrew it to first base. Harwich now led 4-0. This score would stand until the top of the 9th rolled around.

After lead-off man Jeffery Keller (Darmouth), was hit by a pitch and the next Sox batter went down swinging, the rains moved in and moved in quickly.? And this is where the game began to get interesting. Robert Pehl singled to left and Y-D now had runners on first and second with only 1 out.? T.J. White followed up Pehl with a single of his own, loading the bases.? The closer for Harwich, Tyler Burgess (Missouri State), then walked the next two batters letting the Sox cut the lead down to 4-2.? Bases are still loaded, and only one out, as the rain kept on getting heavier and heavier. A pitching change was made and Michael Costello (Radford) came into a 1-out jam with the bases loaded and Sal Annunziata at the plate for the Sox.? Costello threw a ball in the dirt that skipped off the catchers chest, allowing T.J. White, from third base, to come in and score.? It is now 4-3 with runners on second and third.

Annunziata hit a ground ball to third baseman Josh Anderson, who fielded it cleanly but couldn?t get his footing on the wet grass.? Anderson tried to get Andrew Daniel as he crossed the plate for the Sox, but air bailed the throw to the backstop, allowing Elvin Soto to come all the way in to score from second base.? The Sox now lead 5-4 and Annunziata is on second base after the throwing error. We?re back to the top of the Sox order as Matt Honchel digs in with an insurance run standing in scoring position and puddles starting to form on the infield.? Honchel hit a ground ball to short, Hinajosa fielded it on the run and overthrew first base allowing Annunziata to come around to score, extending the Y-D lead to 6-4.

Immediately after this play concluded, the home plate umpire signaled a postponement of the game as the rain had yet to subside.? After about a 15 minute discussion amongst themselves in the pressbox, the umpires decided to call the game, thus reverting it back to the last completed inning, which was the 8th.? Therefore, nothing that happened in the 9th inning counts toward the statline for the game, which allows Harwich to get the 4-0 win.

Rules are rules and even though it is a tough way to lose, the field was in no shape to continue play even if the rain did subside. This loss brings the Sox record to 1-1.

Y-D is back in action tomorrow afternoon, weather permitting, as they take on Brewster Whitecaps. First pitch is set for 5:00 P.M. ET. Check our Twitter and Facebook pages for updates, as well as a link to the Brewster broadcast.