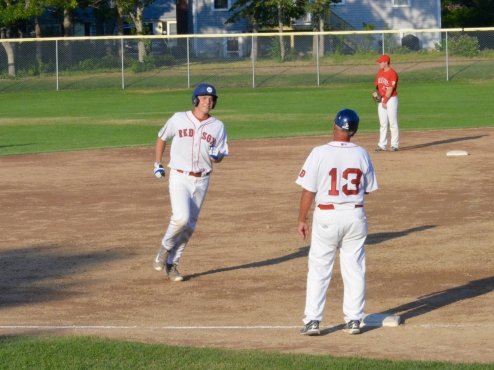 SOUTH YARMOUTH, Mass. ? The Yarmouth-Dennis Red Sox defeated the Orleans Firebirds on Wednesday evening by a score of 7-3, giving Y-D sole possession of second place in the East Division. JJ Schwarz (Florida) lead the offense with a three-run home run that gave the Red Sox what would ultimately be the winning runs, and William Montgomerie (Connecticut) was excellent in 4.1 shutout innings of relief.

Bryan Sammons (0-0) made his first start for the Red Sox on Wednesday evening. He had made six relief appearances entering the game, totaling 6.1 innings and seven strikeouts while posting a 2.84 ERA. He made 18 starts last season at Western Carolina for the Catamounts.

Opposing Sammons was Eli Morgan (Gonzaga, 0-1), who had also primarily worked as a reliever before Wednesday evening. Morgan was hit hard in his only start for the Firebirds, being tagged for eight runs in two innings against the Bourne Braves. He had thrown 10.1 shutout innings from the bullpen, however, and had recorded 20 strikeouts in his 12.1 innings of work this season.

Will Toffey (Vanderbilt) got the Red Sox offense started in the bottom of the first inning, reaching on an error with one out. Brendan Skidmore (Binghamton) followed with a single past Will Golsan (Mississippi) at third base, giving the Red Sox runners on first and second. After JJ Schwarz (Florida) grounded into a fielder?s choice, Kevin Smith (Maryland) hit a two-out single to center field, scoring Skidmore and giving Y-D a 1-0 lead.

In the bottom of the second inning, aggressive, heads-up base running allowed Matt Winaker to go from first to third on a soft ground ball hit by Nolan Brown (Texas Christian). Toffey then drove in Winaker on a sacrifice fly to left field, and the Red Sox extended their lead to 2-0.

The Firebirds battled back in the top of the fourth, getting to Sammons for three runs. Scott Hurst (California State Fullerton) led off the inning with a single to center, and Justin Jones (Georgia State) reached on an error by Smith. Brian Miller (North Carolina) then drove in Orleans? first run of the game on a single back up the middle and gave the Firebirds runners on first and second.

A throwing error on a pickoff attempt by Sammons proved costly, as it allowed both runners to move up one base, and Zach Kirtley (St. Mary?s) laced a single into center field to score both runners and give the Firebirds a 3-2 lead.

But, Nolan Brown reached on a bunt in the bottom half of the inning, and the Red Sox offense was rolling again. Dillon Persinger (California State Fullerton) reached on an error and Toffey walked, loading the bases with one out. Skidmore lifted a sacrifice fly to right, and Brown slid across the plate safely to tie the game.

Y-D wasn?t done in the inning, as Schwarz stepped to the plate with two outs. Schwarz has seen almost strictly off-speed pitches in his limited time with the Red Sox thus far and had struggled at the plate. But, he was able to capitalize on a changeup from Zach Logue (Kentucky) and launch a home run over the center field fence, giving the Red Sox a 6-3 lead.

Schwarz received numerous accolades at Florida this season and has looked excellent in batting practice before games, so it was only a matter of time before his bat started heating up.

The Red Sox added another in the bottom of the seventh, pushing their lead to 7-3. Pinch hitter Tyler Houston (Butler) smacked a single to left field, and Corey Dempster (Southern California), also a pinch-hitter, doubled to left field to score Houston.

Jared Janczak (Texas Christian) worked a scoreless ninth inning to seal the Red Sox?s victory. This was Janczak?s first appearance of the season since joining the team after the College World Series.

This was Montgomerie?s first appearance since June 22nd. After struggling in his two outings, he was dominant tonight, throwing 46 of his 63 pitches for strikes, which is a 73% clip. With the stamina to throw multiple innings in an appearance, he?ll be a valuable weapon for the Red Sox out of the bullpen or in the rotation.

Despite reaching base three times, Will Toffey?s hitting streak ended at four games. He has posted a .450 batting average over the past week and scored seven runs while driving in five.

With a pinch-hit single, Tyler Houston has reached base in his last twelve games. He leads the Red Sox with a .442 OBP this season.

Matt Winaker put the ball in play in all three of his at bats this evening, which has been common for Winaker. He?s struck out in only 9.5% of his plate appearances this season, leading the team.

The Red Sox will be back in action in Orleans on Friday night at Eldredge Park. First pitch is at 7 p.m.