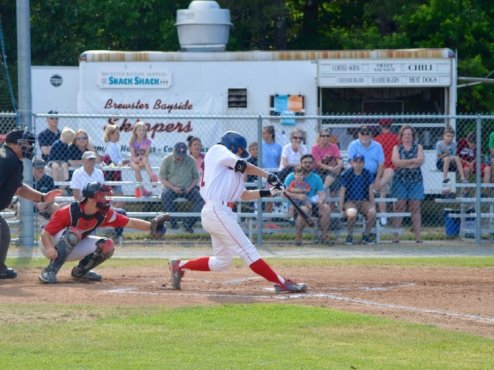 The Yarmouth-Dennis Red Sox (18-16) took another step towards securing a playoff spot on Tuesday night with a 7-0 victory over the Brewster Whitecaps (18-16).

The Red Sox put it all together on Tuesday: pitching, hitting, and fielding. Brett Adcock (Michigan) made his seventh start of the season for the Sox and had his best outing yet. He recorded six innings, struck out four batters, allowed three hits, and held the Whitecaps scoreless.

Cory Malcom (Arkansas Little Rock) finished off the game with three innings of work. He allowed two hits and struck out four batters. With only two pitchers used, it was an extremely efficient outing for the Red Sox.

The Red Sox also got a big performance behind the plate from newcomer Chris Hudgins (Cal St. Fullerton). He recorded his first hit of the summer with a hard-hit single to the left center field gap. Hudgins went 1-for-3 with one walk and played a great game defensively.

When asked whether it is hard coming in halfway through this season and catching for a rotation he is not familiar with, he said, ?A little bit but you just have to try your best and work hard. It?s baseball. It?s a tough sport but it?ll come around.?

Stephen Wrenn hit a solo shot over the left field fence to lead off the fourth inning. This was Wrenn?s fifth home run of the season. He was tied with Brusa for the most home runs on the team until the ninth inning when Brusa hit his sixth of the season.

Gio Brusa put the game out of reach for the Whitecaps in the ninth inning with a 2-run home run over the right field fence. He went 3-for-5 on the day and has hit six home runs in only 22 games.

The East Division teams, now tied for third place, sit two points behind the Chatham Anglers (19-15) and 12 points behind the Orleans Firebirds (24-9). With only 11 games left in the regular season, the Red Sox are looking to move up in the rankings.

Yarmouth-Dennis will play the Harwich Mariners (14-18-1) tomorrow at 6:30 p.m. at Whitehouse Field in Harwich. The last time these two teams met, it was at Red Wilson Field and the Red Sox won 4-1.