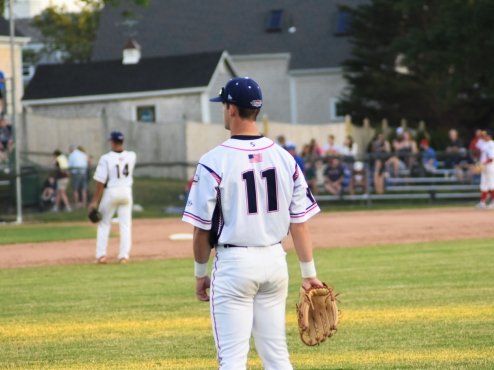 SOUTH YARMOUTH?The Yarmouth-Dennis Red Sox came back from a 4-1 deficit to dispatch the Harwich Mariners by a score of 5-4 in 10 innings on Tuesday. The Red Sox improved to 14-7-4 with the win and have an East Division-leading 32 points on the season.

The Mariners got out to an early lead in the first inning when Andre Lipcius (Tennessee) hit a sacrifice fly off Y-D starter Nathan Wiles (Oklahoma). They added another run in the second, this time on a home run courtesy of Ben Norman (Iowa).

The Red Sox answered with a run in the bottom of the third to cut the lead in half. Birthday boy Jonny DeLuca (Oregon) singled home Christian Koss (UC Irvine) with one out for his seventh RBI of the season.

Wiles was unable to escape the fifth inning on Tuesday for the third time in four starts this season, allowing nine hits and four runs, two of which came (unearned) in the fifth.

At the halfway point, the Sox trailed 4-1 and it looked as though they may lose back-to-back games for the first time since June 17th. The offense finally came alive in the second half of the game, though, and the bullpen shut down the opposition much like it has all season.

In the bottom of the sixth, Y-D added a run with a home run by Noah Campbell (South Carolina). That wouldn?t be all for the Red Sox in the inning, though. With two outs and nobody on, David Hamilton (Texas) walked, stole second, and came home to score from second on a wild pitch. Hamilton wreaking havoc on the basepaths is something Red Sox fans have become accustomed to this season; the Texas product has nine steals in nine games with Y-D.

The teams traded zeroes for an inning and a half before the Red Sox pushed across another run in the eighth on a home run off the bat of birthday boy (yes, there were two Y-D birthdays on Tuesday) Reese Albert (Florida State), his second of the season. Albert?s dinger evened the score at four.

Sam Kessler (West Virginia) and Ryne Nelson (Oregon) each pitched a clean inning, Kessler the ninth and Nelson the tenth, to set up the possibility of a walkoff in the bottom of the extra frame.

Andrew Daschbach (Stanford) walked to lead off the frame and was removed for a pinch runner, Luke Waddell (Georgia Tech). Noah Campbell singled following a Reese Albert flyout to put runners on first and second with one out. That brought Brad Beesley (Cal Poly San Luis Obispo) to the dish.

On the first pitch of his at-bat, Beesley roped a ball into right-center field to score Waddell and end the ballgame.

?It feels great,? Beesley said of knocking in the winning run. ?I?m just glad to be back out on the field to be able to do that for my guys. Today we?d been battling all game. We came back?they had some good pitchers?but for us to do that is pretty big.?

The bullpen was once again excellent on Tuesday, throwing 5.1 shutout innings. Red Sox relief pitching allowed just three baserunners on the evening (two hits and one error), walked none and struck out nine. The twelve strikeouts for Y-D pitching move the team?s total to 238 on the season, first among all CCBL teams.

Brad Beesley?s walk-off single in the bottom of the tenth. Having played in just five contests prior to Tuesday due to injury, Beesley had not seen much live pitching this summer. It did not make a difference; Beesley sent the first pitch he saw to the gap in right-center to score Waddell from first and send Y-D home with a 5-4 victory.

The Red Sox are back in action on Wednesday in Brewster. First pitch against the Whitecaps is scheduled for 5 p.m. at Stony Brook Field.