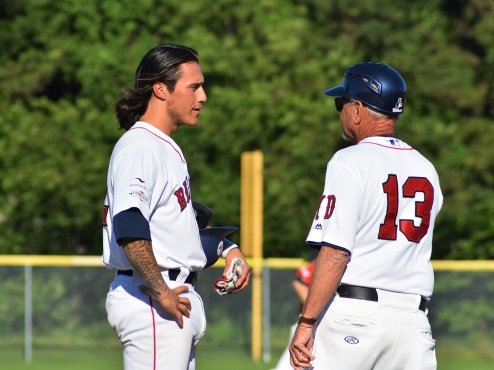 SOUTH YARMOUTH ? It was a slugfest at Red Wilson Field Tuesday night, as the Yarmouth-Dennis Red Sox outlasted the Brewster Whitecaps in a 12-10 win.

Y-D got the offense started in the bottom of the first when they sent nine men to the plate, four of whom came around to score. They sent eight more to the dish in the third and added three more runs.

Nathan Wiles (Oklahoma) got the ball for the Red Sox and was nearly perfect through three innings, facing the minimum nine hitters and picking up two strikeouts. Wiles ran into a little bit of trouble in the bottom of the fourth, though, when he surrendered homers to both Hunter Bishop (Arizona State) and Cameron Eden (Cal Berkeley) to make the score 7-4.

The Sox answered with three runs of their own in the bottom half of the inning and scored two more in the fifth to make the score 12-4 after five. That was all the scoring the Red Sox would do for the day. The Whitecaps, however, were just getting started.

Mitchell Tyranski (Michigan State) entered for Y-D in the sixth and gave up a three-run homer to Eden, his second of the day.

Eden struck again in the eighth inning, this time off Braidyn Fink (Oklahoma), driving home Jesse Franklin (Michigan) on an RBI single to make the game 12-8.

After Y-D went down quietly in the bottom half of the eighth, Fink came back out for the ninth to try to end the ballgame. Tristan Baker (Western Carolina) relieved him after he started off the ninth by giving up a homer, a single, and a fielder?s choice.

The ninth was rocky for Baker?he hit a batter and allowed one inherited runner to score on a single?but he was able to nail down his third save of the season. Baker?s three saves are tied for third in the CCBL this summer.

Zach Ashford (Fresno State) came to the plate four times in the first four innings and reached base safely each time without recording an official at-bat. He was hit by a pitch to lead off the first inning for Y-D and reached via walk in the subsequent three plate appearances. His .397 OBP is tenth among all players in the East division.

Noah Campbell (South Carolina) extended his hitting streak to nine games. He has reached base safely in all ten contests and his average is up to .359 on the year.

Nick Quintana (Arizona) and Zach Zubia (Texas) both hit their first homers of the season when they went back-to-back in the fifth inning.

Nick Quintana and Zach Zubia?s back-to-back bombs in the fifth. With Y-D leading 10-4, Quintana and Zubia each hit solo homers to extend the lead to 12-4. Those homers would end up being the difference in the game.

The victory marks Y-D?s third in a row. They are currently in first place in the East division with 24 points. The Red Sox return to action on Wednesday night with an Independence Day matchup against the Hyannis Harbor Hawks. First pitch at McKeon Park is scheduled for 6 p.m.