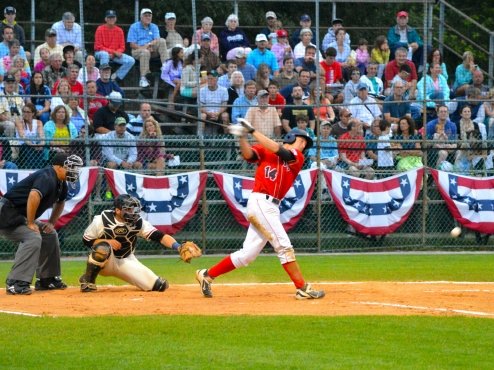 HARWICH, Mass. ? Andrew Stevenson hit a three-run home run in the top of the third inning and the Yarmouth-Dennis Red Sox did not look back, defeating the Harwich Mariners 7-2 Sunday night at Whitehouse Field.

The Red Sox took a 1-0 series lead in the Eastern Division Finals with the victory.

Stevenson (LSU) helped light the fire that was the Y-D offense, driving in four runs on the night. His third-inning homer was his first of the playoffs and second of the summer.

?I just did what I could, got a good pitch to hit, and put us ahead on the board,? said Stevenson of the home run.

Nico Giarratano (San Francisco) began the third with a single, moving to second base after A.J. Simcox (Tennessee) drew a walk, setting the stage for Stevenson to leave the yard.

Harwich won the race to the run column, however, scoring once in the first inning. Kyle Barrett (Kentucky) hit the first of three straight singles, ultimately getting to third on base hits from Ian Happ (Cincinnati) and Anthony Hermelyn (Oklahoma). He scored on a sacrifice fly by Sal Annunziata (Seton Hall), who was the winner of the Home Run Hitting Contest at the Friendly?s Cape League All-Star Game in July.

The visitors completed their scoring in the following inning with four men crossing the plate. Simcox singled to right to plate Rob Fonseca (Northeastern), then Stevenson followed with a single of his own, tallying his fourth RBI after Derek Atkinson (San Fransisco) scored. Giarratano then came in on a fielder?s choice from Michael Donadio (St. John?s) and Simcox followed behind him after a throwing error in an attempt to turn a double play.

Harwich?s other run came in the fifth inning. After leading off the inning with a double, Kenny Towns (Virginia) scored following back-to-back groundouts from Craig Aikin (Oklahoma) and Angelo Amendolare (Jacksonville).

Michael Murray (Fla. Gulf Coast) was the winning pitcher for Y-D, tossing seven innings and allowing both Harwich runs. He struck out four on the night and was relieved by Dimitri Kourtis (Mercer), who pitched the remainder of the contest.

?[Murray] was a bulldog on the mound. He did great, and he?s a great guy. I?m happy for him,? added Stevenson.

The Red Sox, one win away from an appearance in the Cape Cod Baseball League Championship, host Harwich at Red Wilson Field in South Yarmouth Monday for game two of the series. First pitch is set for 4 p.m.