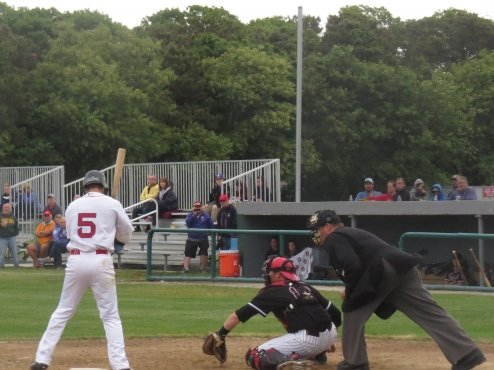 The Yarmouth-Dennis Red Sox swept the Wareham Gatemen in Sunday?s doubleheader at Red Wilson Field. The Red Sox won game one by a score of 7-2 and game two with a score of 3-1. Y-D is now 2-3 on the season, while Wareham is 1-4.? ? ? ?

In game one, the Red Sox bats came alive and with a solid start from Phil Bickford (California State University), they beat the Gatemen for their first win of the season. Y-D scored 7 runs with 11 hits and Wareham scored 2 runs with

Bickford tossed three scoreless innings and gave up just three hits and one walk for the game one victory. The YD bullpen continued to dominate as they have only given up two runs in their last four games. Relievers Dimitri Kourtis (Mercer University), George Thanopoulos (Columbia University), and Josh Pierce (Kent State) all made appearances in game one.

Curtis gave up one run, two hits and walked one batter in two innings. Thanopulos gave up one hit in his 1.5 inning appearance.? Pierce managed to get Y-D out of a jam in the top of the seventh inning with only one run scored. The Gatemen had bases loaded with one out, as Pierce retired the next two Wareham batters and Y-D got its first win of the season in game one with the final score being 7-2.

The Y-D offense started to make some noise in the second inning when Michael Vigliarolo (St. Louis) hit an RBI single to bring in Jason Goldstein (Illinois).? Y-D followed up with four more runs scored in the third inning.? Rob Fonseca (Northeastern) came up clutch when he hit a three run homerun to give the Red Sox a 5-0 lead. The Gatemen answered back in the top of the fourth inning when they scored one run, however Y-D quickly bounced back and scored another run in the bottom of the fourth. Wareham?s reliever Anthony Kay (UCONN) gave up another Y-D run in the bottom of the fifth by walking Jordan Tarsovich (Virginia Military Institute) with the bases loaded.

Y-D?s bullpen only allowed one more run in the top of the seventh to keep Wareham from significantly cutting the lead.? A total of four Gatemen errors benefitted the Red Sox immensely as they were able to get men on base.

The nightcap featured Josh Staumont (Arusa Pacific) for Y-D and Kyle Cody (University of Kentucky) for Wareham.? Staumont dueled three strikeouts in five innings and only gave up one run. Cody threw six strikeouts and allowed one unearned run.

The Red Sox scored their first run of game two in the bottom of the third inning when Donnie Walton (Oklahoma State) hit an RBI single. Soon after, the bases were loaded for Y-D with two outs but Cody got out of the jam unharmed.

Ryan Olson (San Diego) took the mound for Wareham in the bottom of the fourth inning and allowed two hits and one run.? Y-D?s A.J. Simcox (Tennessee) brought in the second run of the game with a sacrifice fly to give the Red Sox a 2-1 lead. Later in the bottom of the sixth inning, Simcox again came up clutch with another sacrifice fly to bring the lead to 3-1.? Reliever Tyler Jay (Illinois) closed the game out for Y-D with two solid 1, 2, 3 innings. Jay struck out two Gatemen batters.

The Y-D Red Sox return to Red Wilson field on Tuesday June 17 to host the Orleans Firebirds. First pitch is set for 5:00pm.