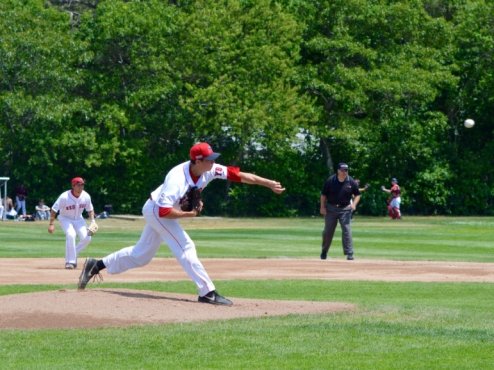 The Yarmouth-Dennis Red Sox (3-4) won their second and third straight games on Sunday afternoon at Red Wilson Field, sweeping the Cotuit Kettleers (3-3) in a doubleheader.

Both games saw limited offense from Cotuit, impressive pitching performances, and explosive rallies from Yarmouth-Dennis. Both contests were decided by single four-run innings from the Red Sox.

The first game of the doubleheader was a pitching battle between starters Jake DeVries (Air Force) of Y-D and Cotuit?s Daniel Brown (Mississippi State). DeVries went 6.1 innings with six strikeouts and seven hits allowed, throwing a first pitch strike to his first four batters of the game. Brown was even more impressive, retiring eleven of his first twelve batters.

DeVries earned the win and Brett Adcock (Michigan), who came in in for .2 innings of work in the seventh, recorded the save for the Sox. This was DeVries first start for the Sox after appearing for one inning in their first game against Chatham.

The tides shifted in the fifth inning with the Red Sox up at bat. The rally started with a single from veteran Stephen Wrenn (Georgia) and continued with hits from Connor Wong (Houston) and Nick Ruppert (Dartmouth). With Brady Conlan (CSU Dominguez Hills) and Nathan Rodriguez (Arkansas) also able to get on base, it was Y-D?s only inning of the game with more than three batters at the plate.

The second game was very similar. Sox starter Christian Morris (Indiana) retired 12 of his first 14 batters; the two others were thrown out stealing and caught stealing respectively. Morris went five innings and only allowed three hits.

Austin Sexton (Mississippi State), the starter for Cotuit, did not fare as well in game two. Sexton was responsible for all four runs and only pitched three innings.

Wrenn, who had a single and a run in the first game fifth inning rally, went 2-for-3 in the second game with an RBI single in the deciding third inning. Cole Billingsley (South Alabama) and Donnie Walton (Oklahoma State) also went 2-for-3 on the day, both scoring runs.

Everyone was doing their part in the Sox?s second victory of the day over the Kettleers. The Red Sox got the leadoff man on base in four out of the six innings of offense played.

The Red Sox offense seems to have exploded in the past three games.? All three of the Sox?s wins have been decided by big one-inning rallies, with 11 of the Sox?s 13 runs coming in innings of three or more runs.

With an off day tomorrow, Y-D looks to rest up after playing three games in two days. The Red Sox will play at Eldredge Park on Tuesday against the Orleans Firebirds for the teams? third meeting.